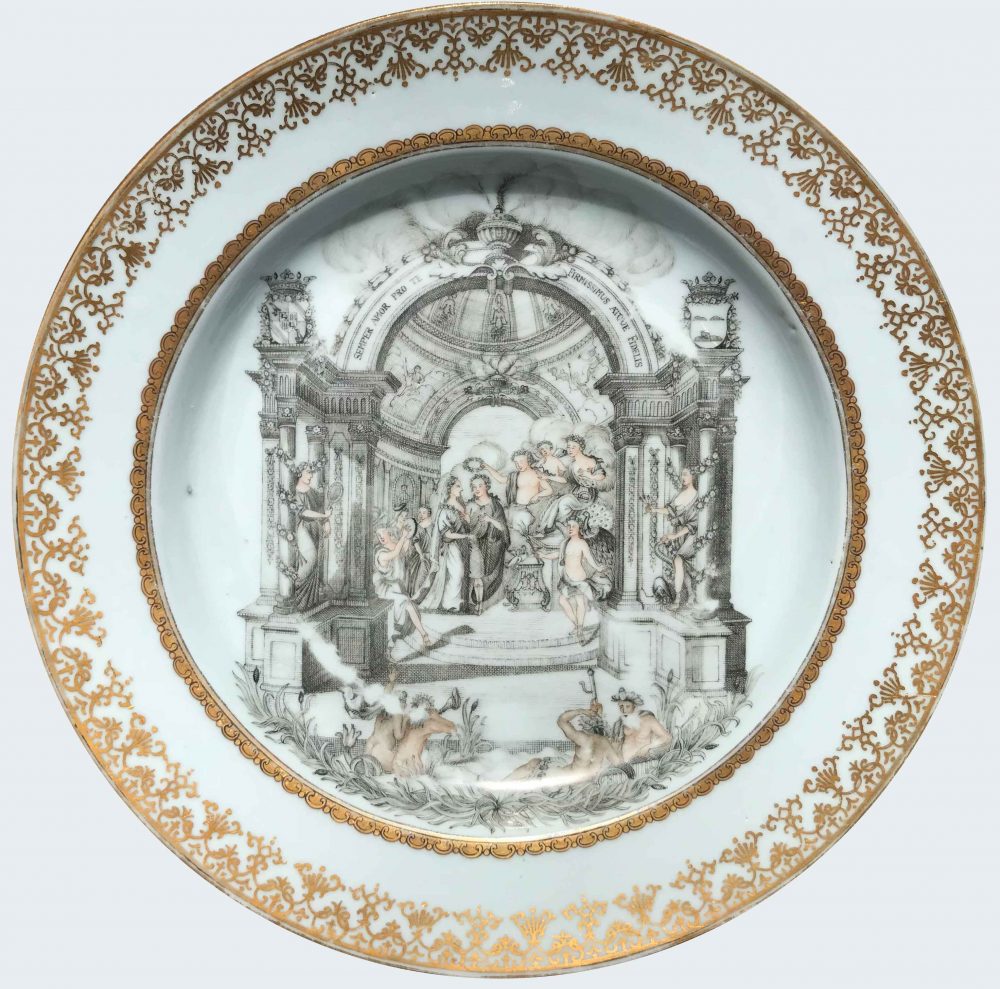 Finely and delicately decorated with an allegorical marriage scene in a grand architectural setting, below an arch inscribed SEMPER AMOR PRO TE FIRMISSIMUS ATQUE FIDELIS, the columns on either side surmounted by small coats-of-arms of Nicolas Geelvinck and Johanna Graafland, Neptune and sea-nymphs emerging from reeds to watch the scene in the foreground, the well with gilt ruyiheads and the rim with a band of gilt Meissen-style lacework.

This decoration appears on at least six known armorial services, all made for Dutch families.

Another plate, from the Mottahedeh collection, from the service Geelvinck/Graafland is illustrated by Howard & Ayers in China for the West, London and New York, 1978, vol.II, p.394, no. 391.

Another plate, from the service Geelvinck/Graafland is in the collection of the Rijksmuseum (Amsterdam) and illustrated by D. F. Lunsingh Scheurleer in Chinese Export Porcelain, London 1974, fig. 284.

A plate, from the service van Gergen van der Gijp/van Beaumont Cornelis is illustrated in the catalogue of the exhibition L’Odyssée de la Porcelaine chinoise (2003, p. 212, no. 164).

A plate, from the collection of the British Museum (London) is illustrated by Regina Krahl & Jessica Harrison-Hall in Ancient Chinese Trade Ceramics From The British Museum, pp. 140-143.

A charger of the same scene dated 1741 is in the Victoria and Albert Museum, illustrated by W. B. Honey, Guide to Later Porcelain, pl.113b.

The arms are those of Nicholas Geelvinck, who later became Mayor of Amsterdam, and Johanna Jacoba Graafland; they married in 1729. This decoration appears on at least six known armorial services, all made for Dutch families. The scene, depicting the wedding of Juno and Hymen with Ceres and Prudence attending, probably derives from a seventeenth century book frontispiece.