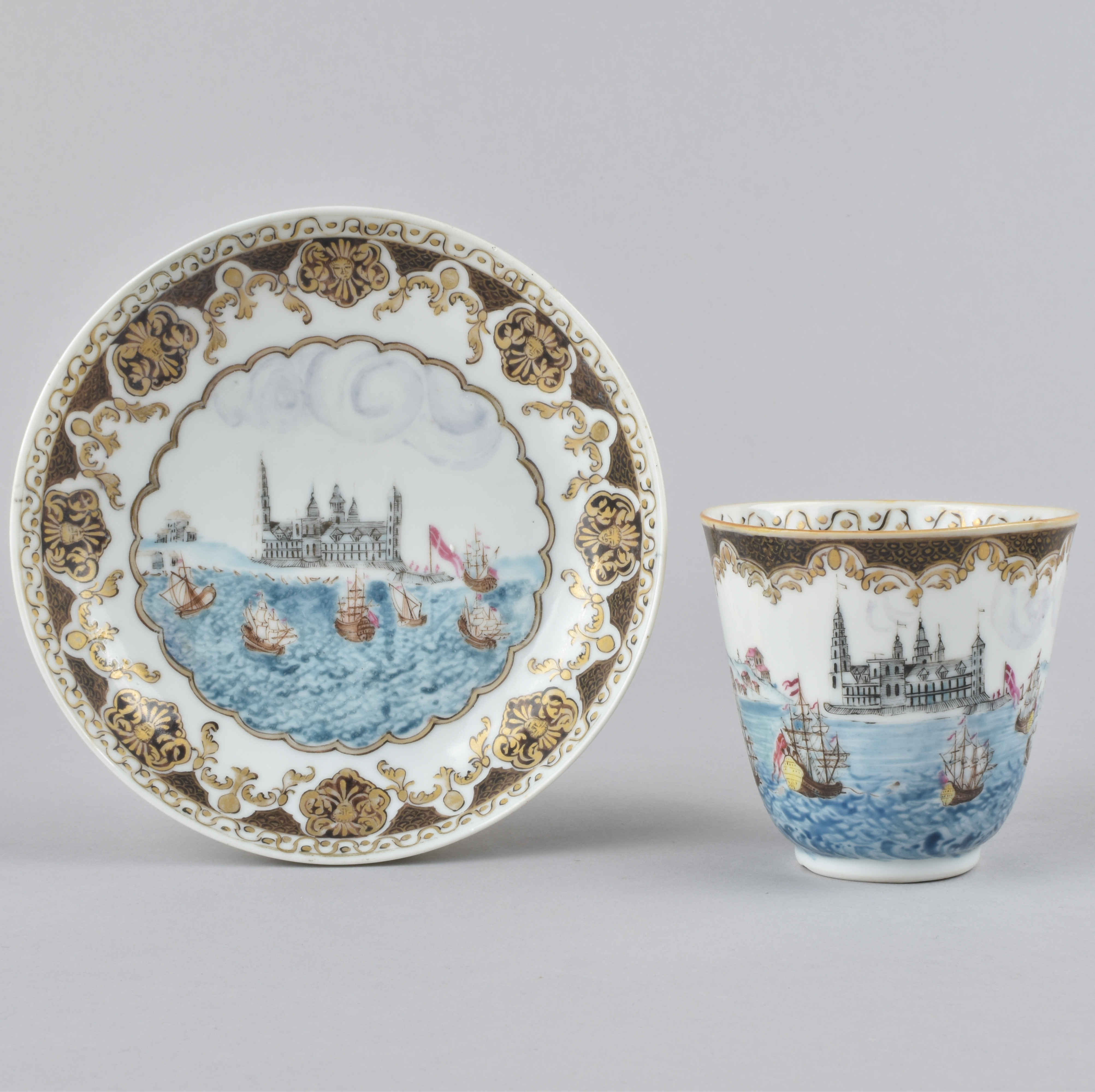 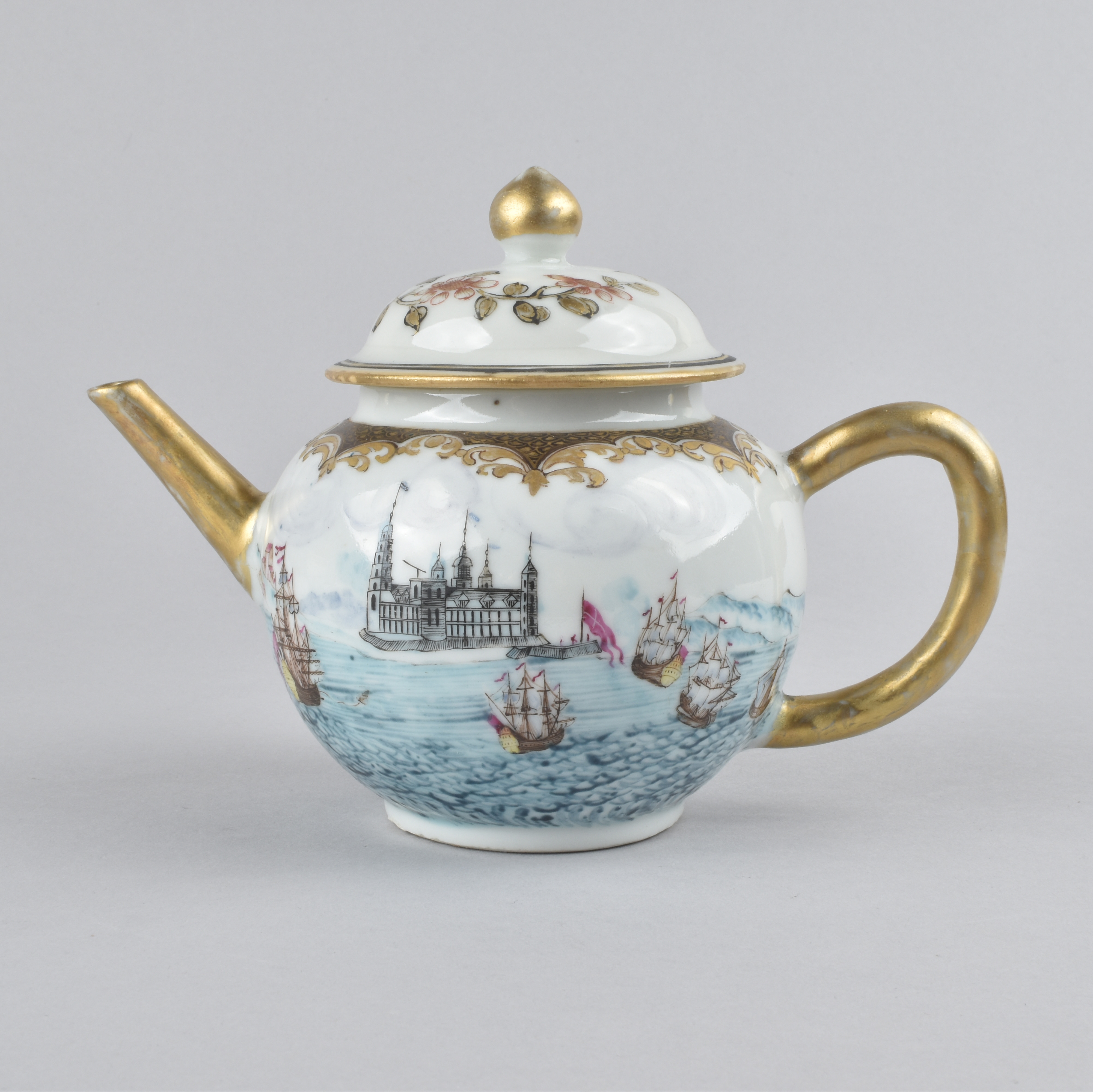 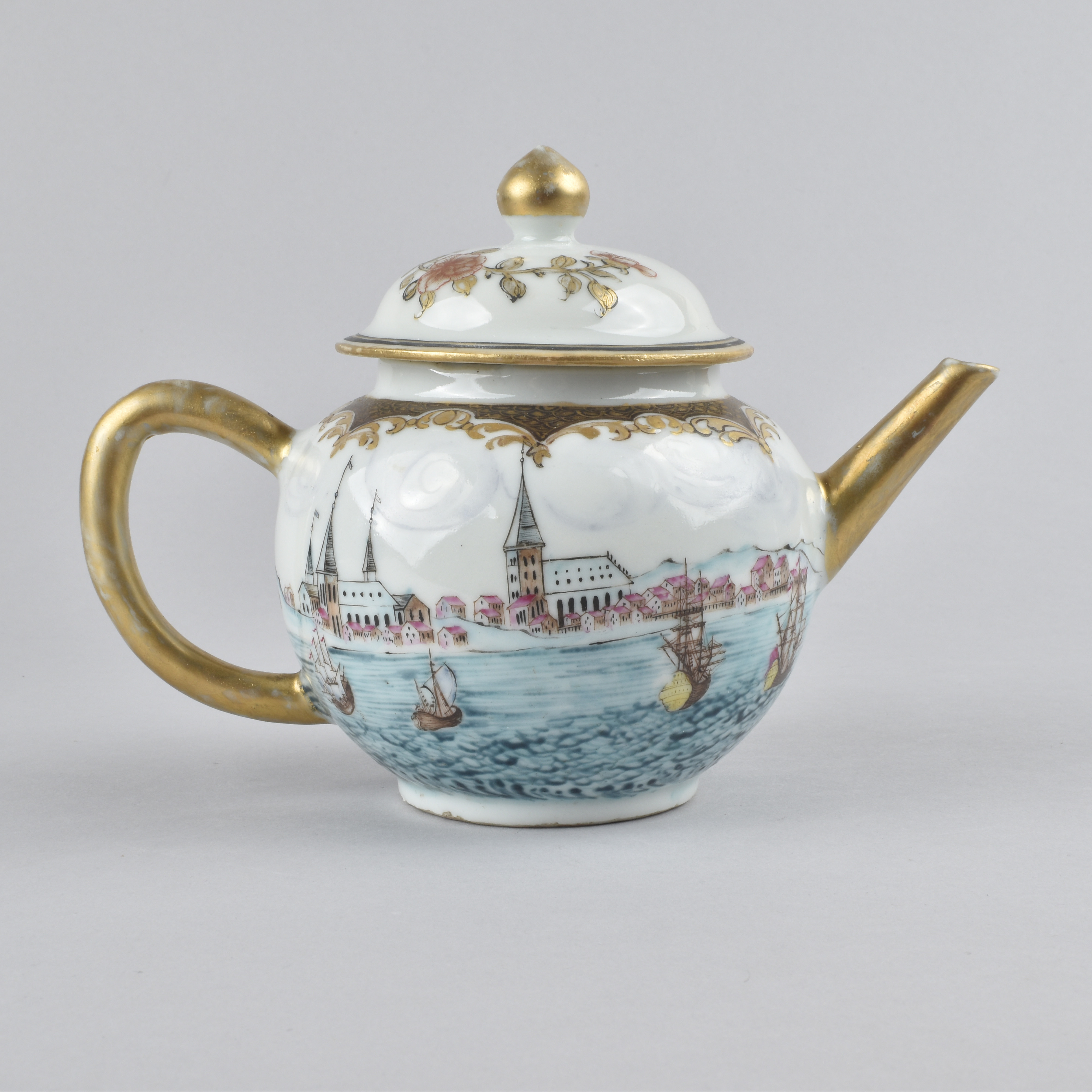 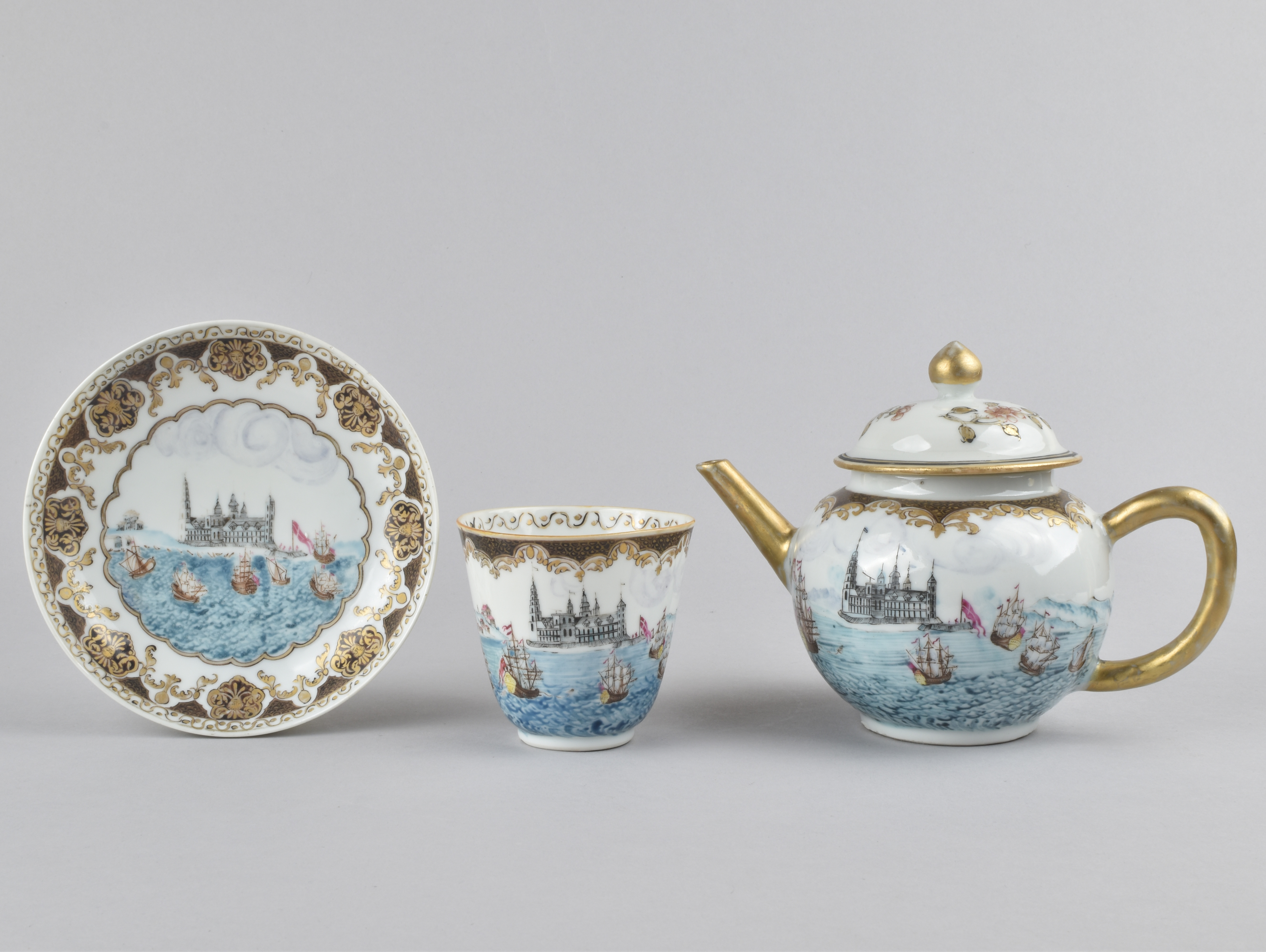 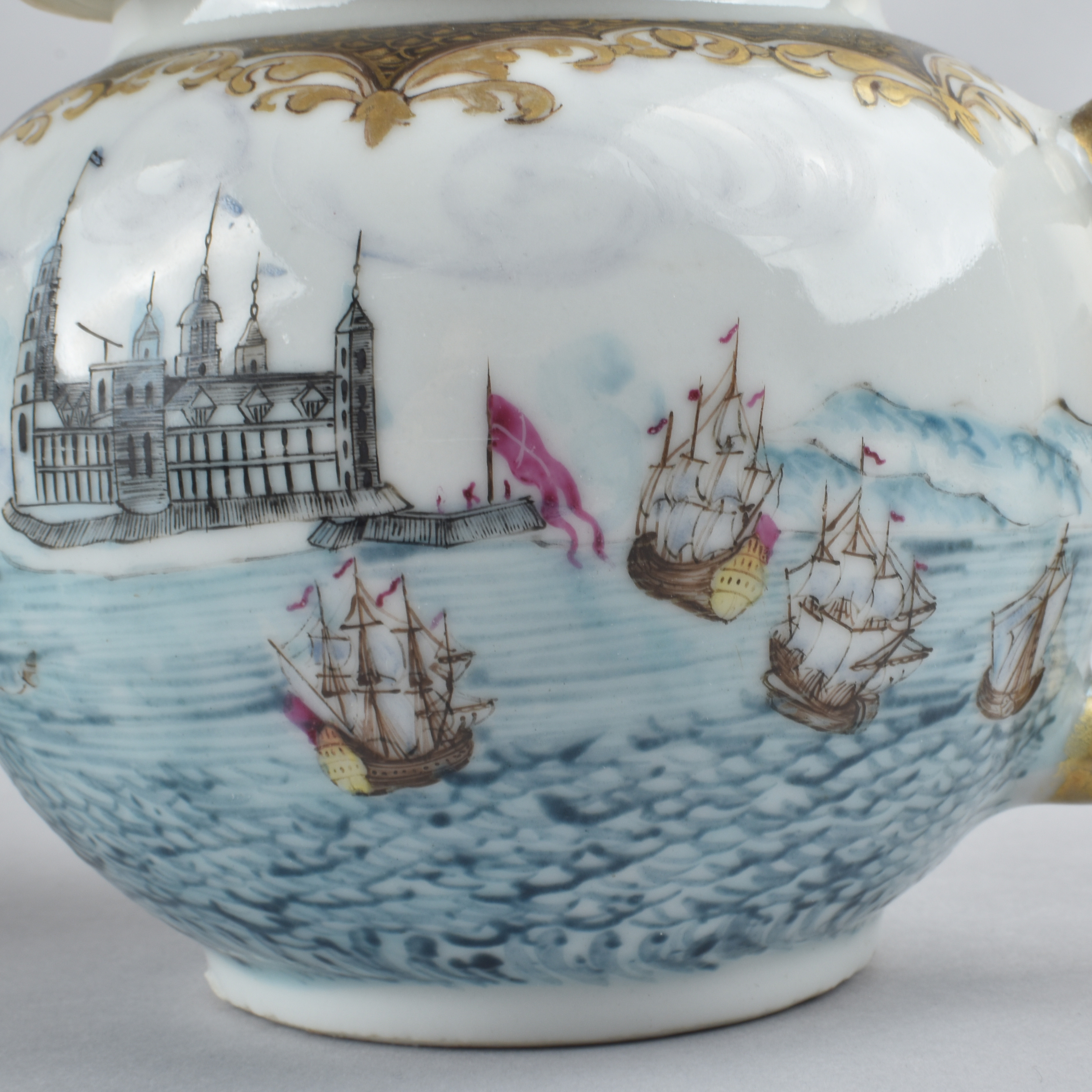 A topographical Chinese export porcelain teapot and cup and saucer depicting numerous Danish merchant ships moored offshore Kronborg Castle in Denmark—a scene copied directly from an engraving by Johann August Corvinus from a series of six prints published c. 1718 titled “Vorstellung Der Remarqabelsten Prospecten in Denemarken,” depicting six of the most remarkable scenes in the Kingdom of Denmark. Among these scenes are views of the town of Copenhagen, and Kronborg Castle titled “Der Öre Sund.” Each print is after the original drawings by Christoph Marselis, who had first-hand experience with each view because he served as Royal Architect in Copenhagen between 1704 to 1716. [i] A copy of “Der Öre Sund” be found at the British Library as part of King George III Topographical and Maritime collections—an important collection of 30,000 to 40,000 maps, plans, views, sea charts, and atlases.[ii]

Although a later print of this engraving was published c. 1760 by Georg Balthasar Probst, the earlier c. 1718 print by Corvinus is undoubtedly the source design. Details are carefully copied from the Corvinus print onto the teapot and goblet, including several figures in pink enamels standing at the flag bastion and the roofs of the dormer windows decorated en grisaille, both of which are missing in the later Probst print. The two engravings provide an interesting timeframe as to when this partial tea set might have been produced, and the design and execution of the Baroque-inspired border decoration and flourishes, and forms of the small bulbous teapot (18cm x 10.5cm x 13cm),[iii] flared beaker-form cup (8cm x 7.5cm)[iv] and saucer (13.4cm x 3cm)[v] all point to a production period of c. 1730-40.

To the castle’s left is the bustling Danish port city of Elsinore (Helsingør), and to its right lies the “gateway” to the Baltic Sea—the Sound (Øresund). The Sound was historically significant to the development of Denmark as an economic powerhouse and continues in modern times to serve as the most important waterway connecting the Baltic Sea to the Atlantic Ocean. Kronborg Castle is strategically located at the Sound’s narrowest point, commanding a powerful military presence overlooking all ships leaving and entering the Baltic Sea. Kronborg Castle was originally built in the 15th century to increase Danish control over maritime trade to and from the Baltic Sea.[vi] Kronborg Castle served a vital economic role as the seat of the Sound Dues—requiring ships passing through the Sound to pay an ad valorem tax to the Danish crown, which was calculated as a percentage of the total declared value of cargo.[vii] Kronborg Castle guarded the Sound for centuries with powerful cannon  capable of sinking any noncompliant vessels.[viii]

The square Renaissance castle is comprised of four wings which enclose a central courtyard, with multiple spires adorning each wing.[1] Kronborg’s tallest spire, the Trumpeter’s Tower, amplified the fanfare of trumpeters warning of danger or invasion.[2] Interestingly, the wide flat-roofed tower just left of center of the castle is only slightly taller than each wing, yet caused the contemporary title holder to pale in comparison.[3] Known as the Telegraph Tower because it was later outfitted with an optical telegraph in 1801, its wide rooftop boasted unprecedented panoramic views of the Sound at a high vantage point—a perfect position for the optical telegraph which enabled Kronborg Castle to send signals to the nearby capital city of Copenhagen.[4] However, the small apparatus depicted above the Telegraph Tower predates the optical telegraph—likely a  telescope, which served a dual purpose of surveillance over maritime activities and as a precursory tool that enabled early optical signaling between Kronborg Castle and Copenhagen.[5] The telescope’s hyperbolic size is faithfully replicated from the European source engraving—demonstrating its key role in Danish control over the Sound.

The Telegraph Tower formerly functioned as Kronborg’s main cannon tower, boasting its own dome and spire, but was destroyed when Swedish forces bombarded Kronborg Castle during the Dano-Swedish War of 1658-60.[6] The original Telegraph Tower’s demise is immortalized in an engraving depicting the Swedish siege of Kronborg Castle in 1658 published by Christoph Riegel.[7] One can easily imagine the courageous trumpeters sprinting to their sixty-two meter tall spire upon first news of the Swedish forces, and sounding off the solemn tune of war throughout the Sound—sending a clear signal to all: “Prepare to defend against invasion!” Although Denmark lost this battle, they won the war with the aid of the Dutch, and Kronborg Castle was returned to Danish control.[8] Notably, just fifty-six years prior to the Swedish siege, Kronborg Castle was immortalized as Elsinore, the setting for Shakespeare’s Hamlet.

“To be or not to be, that is the question:

Whether ’tis nobler in the mind to suffer

The slings and arrows of outrageous fortune,

Or to take Arms against a Sea of troubles.

And by opposing end them: to die, to sleep.”

Shakespeare’s oft-quoted opening line of Prince Hamlet’s iconic soliloquy evokes a universally understood dichotomous dilemma—the choice between action or inaction. While the existentialist Danish Prince was contemplating life and death, Shakespeare’s masterpiece continues to withstand the test of time, in part because of its general relatability to human struggles. Over the next four centuries, Hamlet’s dilemma would inspire the globe—invoked in times of social injustice and catastrophe in addition to the daily mundane.[9]

In the early 18th century, the Danish King Frederik IV confronted Denmark’s own dichotomous dilemma—to be, or not to be a Chinese export trading nation. Between 1616 and 1729, Danish activities in the East Indies only involved Tranquebar, India.[10] However, the Tranquebar trade was characterized by its unreliability and irregularity, severely limiting the opportunity for Copenhagen to develop into an entrepôt for East Indies goods.[11] When the Great Northern War broke out in 1700, Denmark was once again at war with Sweden. Profits in the Tranquebar trade declined rapidly because Swedish privateers in the North Sea increased losses and overhead costs, while a forced loan to the Danish state to support war efforts eviscerated the Danish East India Company’s finances, forcing the Company into bankruptcy.[12]

However, Denmark’s entrepreneurs refused to suffer the slings and arrows of the outrageous fortune created by the Great Northern War, resolving instead to take arms against the sea of troubles ahead—forging new Danish China trade routes from Copenhagen to Canton. In February 1730, the Kinesiske Societet, or the Chinese Society, received the green light to act on these China trade ambitions when King Frederik IV granted permission to all Danish subjects to trade in China from Copenhagen.[13] Ironically, the Great Northern War that led to the Danish East Indies Company’s eventual demise in 1729 would supply the Chinese Society with the ship that would sail the inaugural voyage from Copenhagen to Canton—the Cron Printz Christian, a captured Swedish frigate.[14]

All Danish merchant ships sailing to China laid to at Elsinore after departing Copenhagen where it was typical to wait for the right weather conditions.[15]Thus, “a journey was not considered to have started until Kronborg had been passed.”[16] Signaling the commencement or conclusion of each grand voyage, Danish merchant ships saluted Kronborg by firing nine shots—followed by Kronborg’s own nine-gun salute.[17] On October 1730, the Cron Printz Christian left Copenhagen with a cargo full of silver coin and returned with “more than a thousand crates of tea, 305 stacks of porcelain, 274 pieces of tuttenage metal, and many other items,” including 101 crates of the crew’s personal trading goods, saluting Kronborg on each leg of the voyage.[18] The Danish inaugural voyage to Canton was a resounding success and caused King Christian VI to sign an official charter in 1732 for the new Danish Asiatic Company (“DAC”).[19]

Whether it was Kronborg’s reverberating nine-gun salute, its protective presence over maritime trade through the Sound, or simply the fact that Kronborg was the first and last indicator of home, the Renaissance castle undoubtedly struck a chord with many China trade merchants. Exemplary of Kronborg’s influence over the Danish-China trade, the DAC’s last ship to China, the Frederik VI, is painted passing Kronborg in the 1820s at the Maritime Museum of Denmark.[20] It is highly likely that this partial tea set was ordered in one of the earliest Danish voyages to China—perhaps the inaugural voyage in 1730 or one of the early DAC voyages. The DAC dispatched five ships from Copenhagen to Canton between 1732 and 1740, each laden with silver coin and returning with tea, porcelain, silks, and other Chinese export luxuries.[21]

This partial tea set is one of the most important Chinese export porcelains made for the Danish market. The topographical Chinese export teapot and cup and saucer are the only three pieces known, from the best of our knowledges. A similar tureen and stand with an important topographical scene after a European engraving for the Swedish market can be found at the Metropolitan Museum of Art in New York City, depicting Läckö Castle on Lake Vänern.[22]Externally, despite visual similarities, Läckö Castle is a Swedish medieval castle in the Baroque style, whereas Kronborg Castle is a Dutch Renaissance castle, yet internally, both castles share significant Baroque furniture and decorations. Topographical scenes more commonly depicted country homes, or views of an estate—a vogue, yet personal memento. Topographical scenes of still existent national landmarks with considerable cultural, historical, and economical importance are rare. In addition, Kronborg’s rich China trade connection adds yet another layer of complexity that would make a fantastic addition to any Chinese export collection.