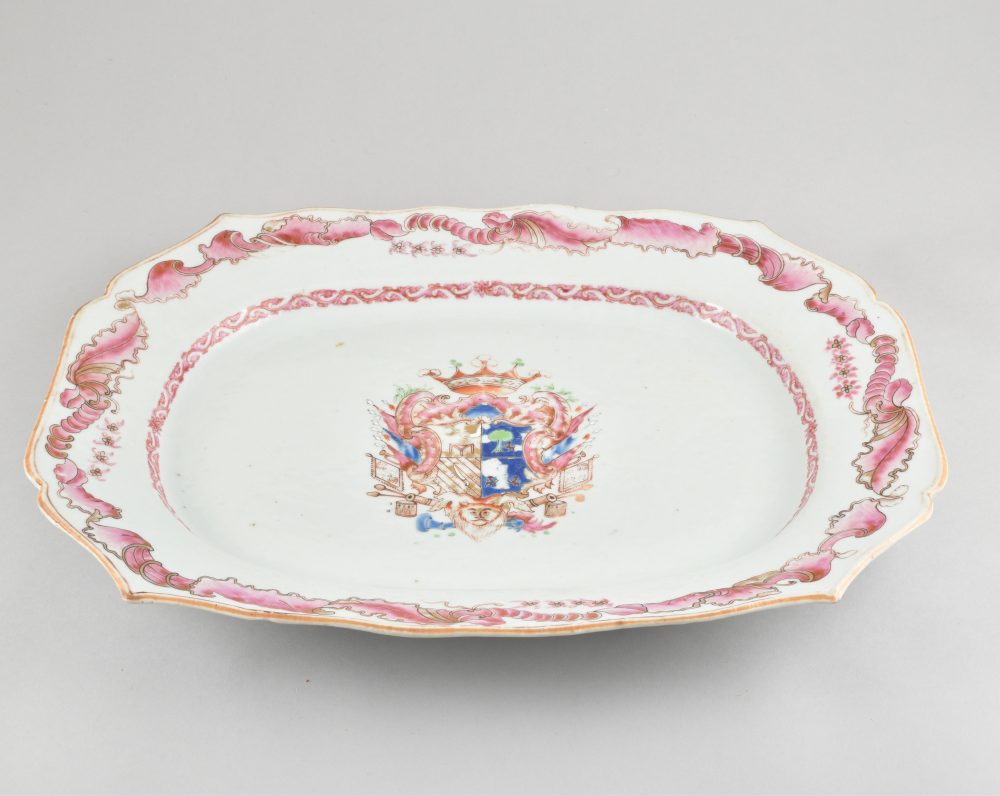 Enamelled in the famille rose palette and gilt with a central coat-of-arms for Raón y Guttiérrez, quarterly: 1. or, a gallows, in chief an arm holding a knife argent;2. azure, a tree with a wolf sable against the trunk; 3. or, four bends or and over-all a knife argent;4. azure, a tower argent between two lions against its wall. The arms beneath a marquis coronet and surrounded by flags, standards and war trophies. The well is decorated by a band of foliate scrolls painted in shades of pink with gold hightlights and a rococo shell border in various shades of pink outlined in gold on the rim.

From a collection of the South of France

The present oblong dish seems to be one of the four known for this service.

The second oblong from this dinner service dish is in the collection of Museu National de Arte Antiga (Lisbon) and illustrated by Rocio Diaz in Chinese Armorial Porcelain for Spain (2010, Jorge Welsh Books, pp. 176, no. 21, ill. 21b).

The third oblong dish from this dinner service  is in the collection of the Museo Nacional de Artes Decoratives (Madrid, Spain). The fourth dish seems to be in a private collection.

Four plates from this dinner service are also in the collection of the Museu Nacional de Arte Antiga (Lisbon). One is illustrated by Beurdeley in Porcelain of the East India Companies (London, 1962, p. 188, cat. 168).

A plate from this dinner service is illustrated by David Howard in Made in China – Export Porcelain from the Leo and Doris Hodroff Collection at Winterthur (2005, p. 73, no. 35), sold at Christie’s NYC, The Hodroff Collection, Part III, 21 january 2009, lot 269.

Plates, dishes, salad bowls, bowls and a spice box from this service are in various private collections.

The service of José Raón y Gutiérrez (1703-1773) can be dated ca. 1769 and must have been ordered during his residence in the Philippines, from 1765 until his death in 1773. José Raón y Gutiérrez was born in Calahorra on 29th April 1703, he married Teresa Cejudo in Ceuta (Spain) and died in Manilla on 4th January 1773. In July 1765 Field Marshal José Raón, former Governor of Panama, arrived in Manilla, having been appointed Governor, Captain General and President of the Real Audiencia (Royal Hight Court of Justice) of the Philippines. He held the highest rank in the Spanish Army and was therefore able to use the coronet of a marquis above his arms.

He had a reputation of greed and corruption, which perhaps explains the order of such an impressive service. In 1767, Charles III ordered the expulsion of the members of the Society of Jesus from Spanish territory. He revealed this secret in exchange for a large sum of money. Raón and his son were put under house arrest and their property was confiscated. He died in Manilla before judgment was passed.

This border was favored not just in Spain, it also appears on a service made for the Italian market (Cayetano-Pignatelli service).