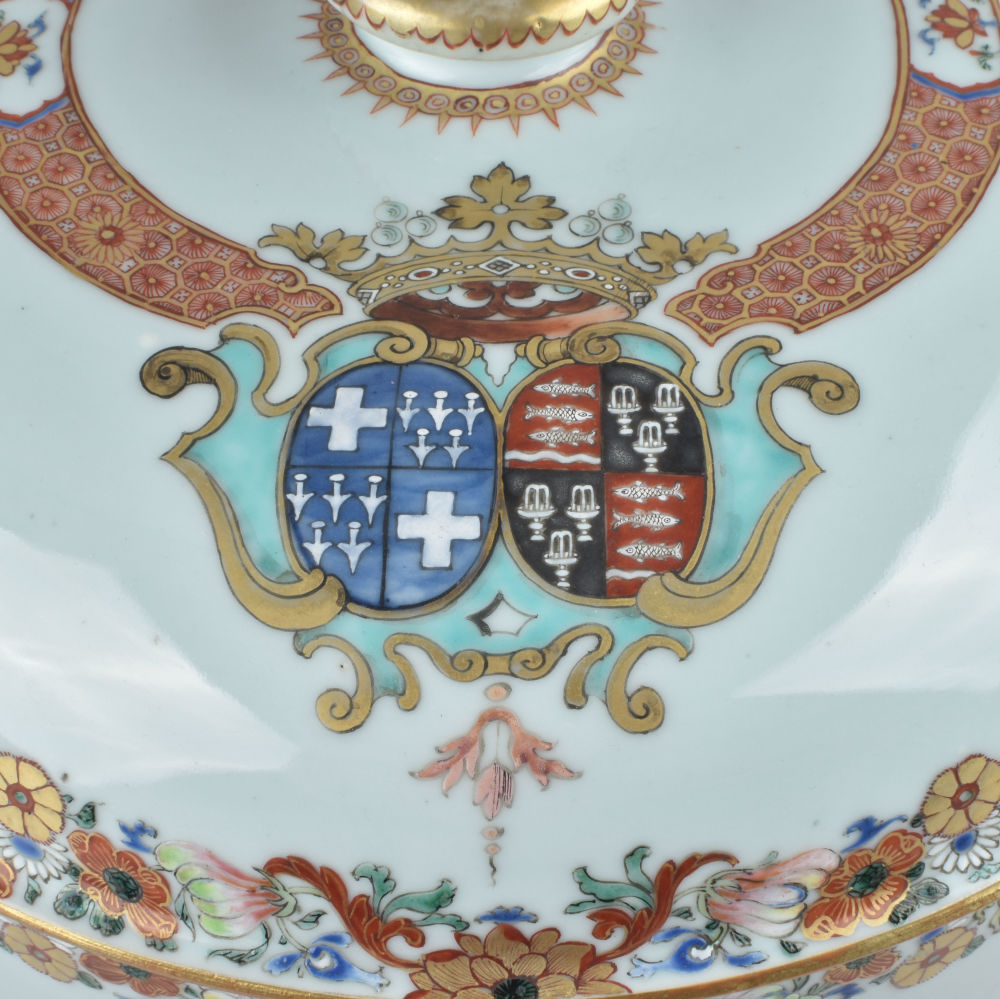 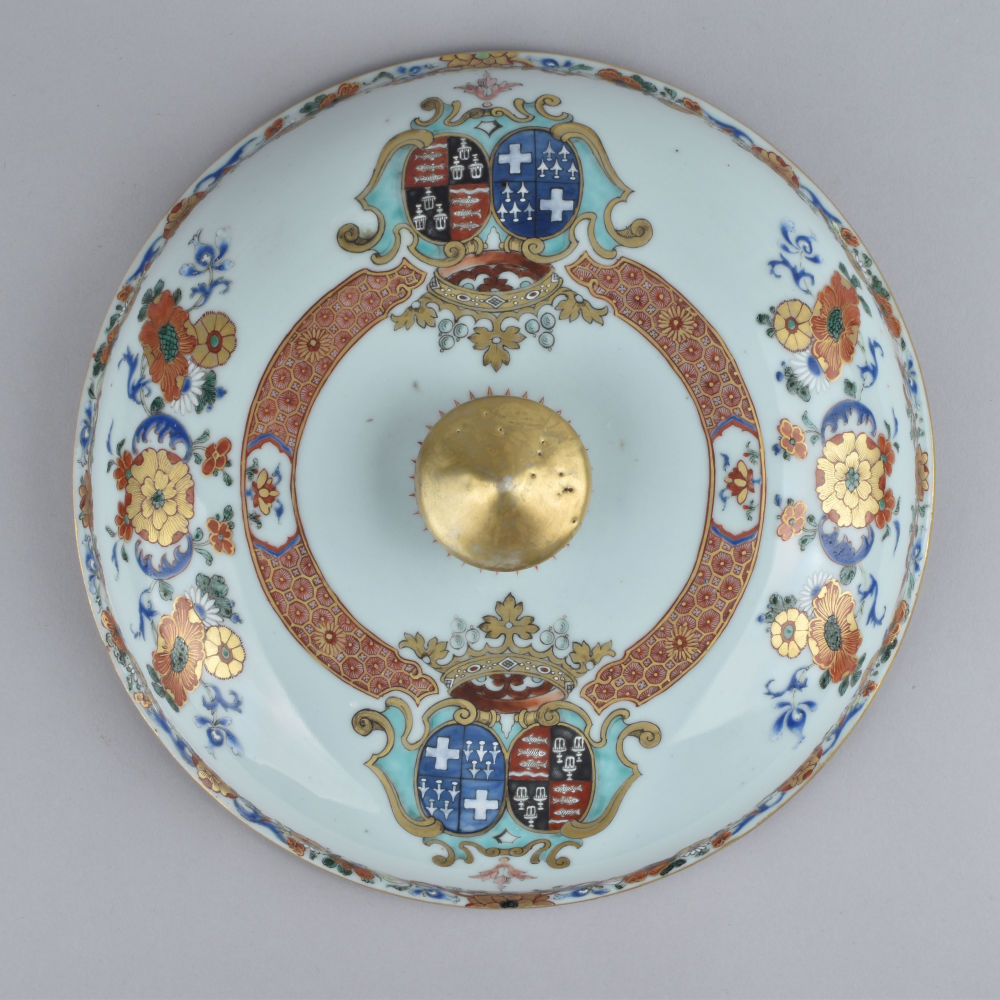 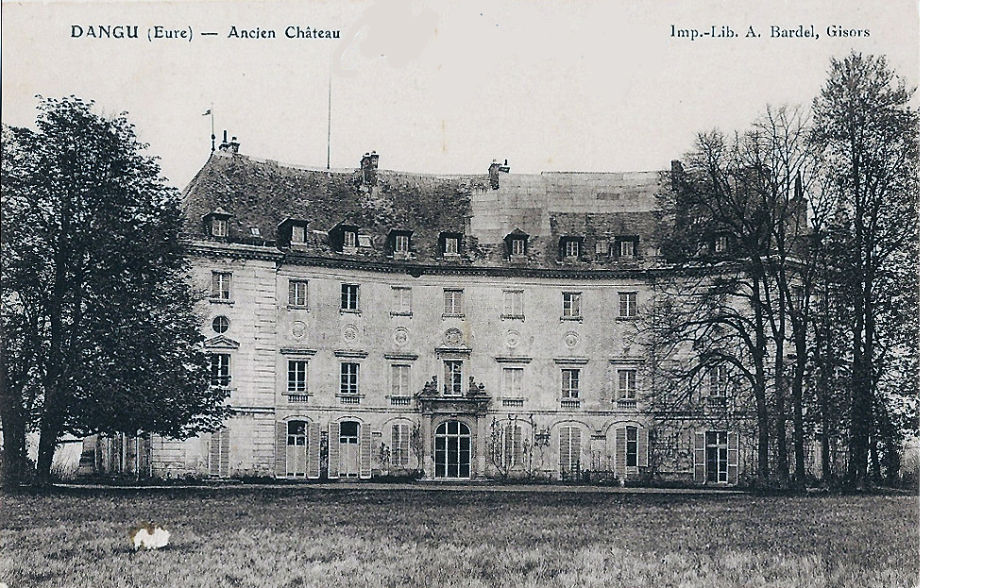 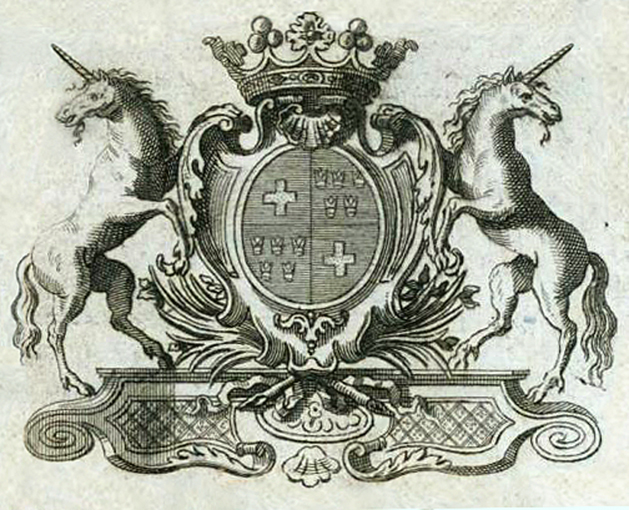 A massive Chinese armorial pot-à-oille for the French market. Yongzheng

Decorated in the famille rose palette with a wide and ornate frieze of fruit and flowers, a serrated frieze, emblazoned with the coat of arms of the Jubert de Bouville. Quarterly: 1 and 4, azure, a cross couped or; 2 and 3, azure, five spearheads argent, three and two; and Guyot, Quarterly: 1 and 4, gules, three fishes naiant in pale, the one in the middle centre-passant, in base a sea argent; 2 and 3, sable, three fountains argent, two and one.

The elegant and lavish décor, the wide range of colors of the overglaze enamels, the diversity of the shaped piece and their often- impressive dimensions along with the somewhat ostentatious coat-of-arms place this set among the most beautiful examples of Chinese armorial orders ever made for France. Its spectacular character was meant to show the financial power of its owner at the very beginning of the 18th century, a time when an order of this magnitude was the privilege of alimited elite. The set also signals the transition between two periods and two styles. The large dimensions of some of its pieces are inspired by the French silversmithery and earthenware during the reign of Louis XIV (1638-1715) and the Régence (1715-1723). Much as the grid-like pattern of the frieze, punctuated by four cartouches indicates the influence of Chinese porcelains of the Kangxi style (1662-1722). On the other hand, the vast variety of overglazed enamels illustrates the explosion of colors that appeared on Chinese porcelain around 1720 with the firing at a low temperature. The rise of the East India Company in the beginning of the reign of Louis XV, contributed to revive the economy ruined by the financial crises after the collapse of the Law Bank in 1720. In the wake of this revival, many important figures, including members the King’s entourage like Philibert Orry, general comptroller of finances or Jean-Frédéric Phélypeaux de Pontchartrain, comte de Maurepas, minister of the Navy, all ordered Chinese porcelain. Other patrons, with ties to the East India Company, such as Louis-Euverte Angran, trade intendant or Noël Danycan de l’Espine, a famous privateer of Louis XIV, valued such luxuries at a time when porcelain was still a privilege conjured up by the Great Dream of the Orient. Only a dozen sets made for a privileged clientele during the 1725/1735 decade appear in Antoine Lebel’s publication. It is in that context that the Jubert de Bouville order was made. It appears to be one of the very first sets made for the French market. It was most certainly the object of much care and probably vastly expensive.The Jubert family starting with Guillaume in the beginning of the 15th century, was originally from Vernon. This town in Normandy is at the crossroads between Evreux, Beauvais, Paris et Rouen in the Seine valley. The Joubert acquired the estate of Bizy in 1596. In 1675, Michel-André built a longitudinal mansion, flanked by two higher pavilions, with two horse-shoe shaped stoops. Dubbed the “Norman Versailles” the mansion became the property of the Duke of Belle-Isle (1684-1761), grandson of Superintendent Fouquet, of the Comte d’Eu (grandson of Louis XIV) and finally of the Duke of Penthièvre.

Louis-Guillaume Jubert (1677-1741), following in his father Michel-André’s footsteps, became conseiller à la Cour des aides in 1699, maître des requêtes in 1703, intendant d’Alençon in 1708, of Orléans in 1713, and finally conseiller d’État in 1731. André Jubert was born in Orléans in 1698. He was the grandson of Michel-André and son of Louis-Guillaume and spent his childhood in Bizy until the age of 12 when the Juberts sold the château and its magnificent gardens in 1720 at the death of Michel-André. The family then moved to the Château de Dangu, near Gisors, a seigneury bought from Charles-François-Frédéric de Montmorency-Luxembourg in 1714. After having been Conseiller à la Cour des aides de Paris (1720), and maître des requêtes in1723, he married Marie Thérèse de Chenizot in 1724, the daugher of a rich counsel member of the Paris parliament, François Guyot de Chenizot. He was Secretary to the King, receveur général des finances in Rouen as of 1707 and secrétaire des finances in 1726. He lived in a townhouse on the Ile Saint Louis, purchased in 1719. He had the façade modified by architect Pierre Vigné de Vigny. Massive sculpted chimeras adorn this remarquable building which was entirely remodeled in the grandiose style of the Régence. The alliance with the Chenizot family was a further step toward the world of finance. Two generations earlier in 1664 (the year the East India Company was founded) Michel-André Jubert de Bouville married Françoise Desmarest, the sister of Nicolas Desmarest de Maillebois, contrôleur général des finances in 1708, and niece of “The Great Colbert” a famed statesman and First Minister of Finance under the rule of Louis XIV.

The pot-à-oille presented by our gallery was made for this wedding. The thoroughly modern spirit of this order Jubert de Bouville – Guyot de Chenizot calls to mind the magnificence of the façade of the Hôtel de Chenizot. The impression of power it emanates suggests that François Guyot could have been instrumental in ordering the piece to present it on the occasion of his daughter’s wedding. Perhaps financial ties between François Guyot and the East India Company could also explain this Chinese Porcelain order. It is possible that Louis-Alphonse Jubert de Bouville, brother of André, had also a part in the order of this Chinese porcelain set. He made a career in the Royal Navy and after a number of campaigns in Canada from 1722 to 1729, was appointed lieutenant de vaisseau in 1741, later capitaine de vaisseau in 1751. In 1755 during the Seven Years War, he was captured by HMS Oxford and spent two years in prison in England. In 1759 King Louis XIV and the Marquise de Pompadour were godfather and godmother of his son, yet another sign of the spectacular social ascension of the family in just a few generations.

There is a mistake here in the rendering of the metal on the coat-of-arms: the gold spearheads should be golden instead of silvery. A number of reasons could explain the mistake: Either the Chinese enameller misread the model or it was an oversight of the craftsman who worked on the original that was sent to China. It is unlikely that the engraver wanted to show a cadency. A reason that was often given to explain mistakes in the rendering of crests on Chinese porcelain.

André Jubert de Bouville died on September 14th 1742 at the château de Dangu only one year after his father. The family kept the property for a short period of time before selling it on August 31st 1781, to the baron de Breteuil then ambassador of France in Vienna. The Château de Dangu burned down in 1911, this Chinese armorial set hence became one the rare testimonies of the lavish lifestyle of the Joubert family and the world of finance in general in the beginning of 18th century.