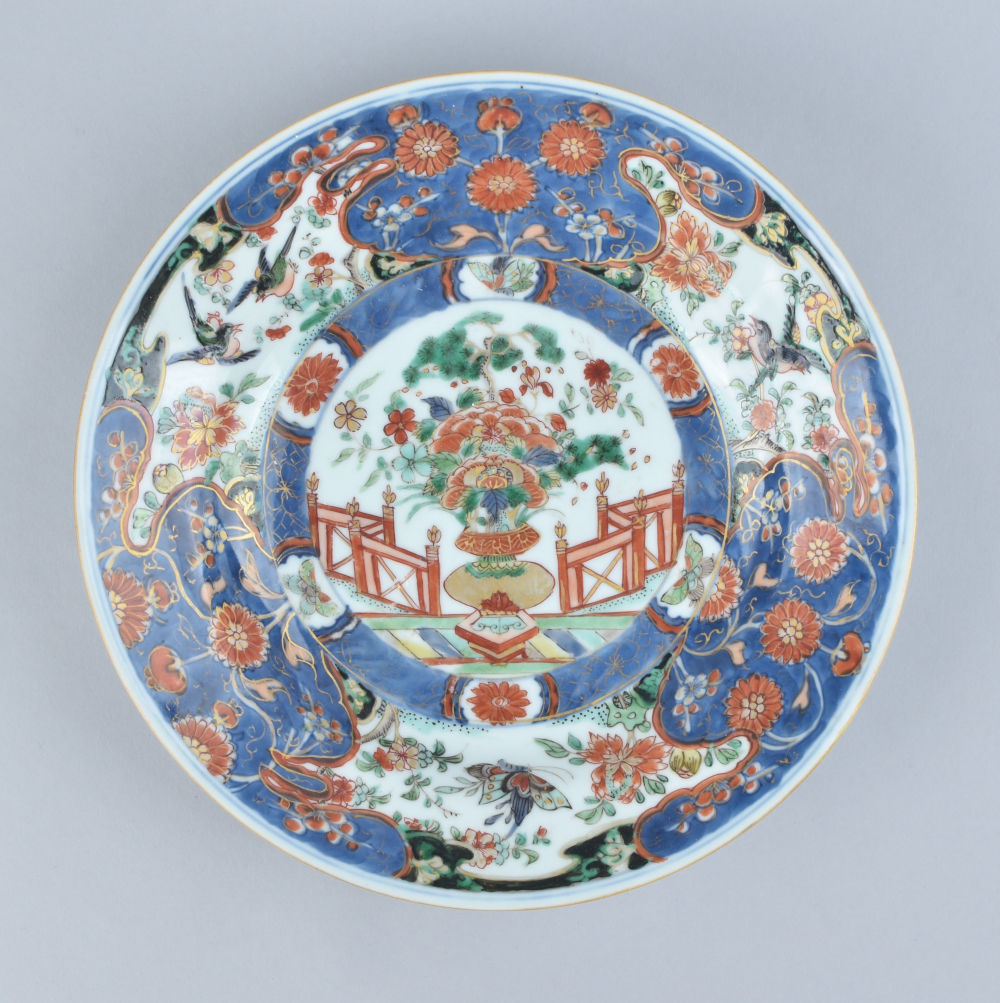 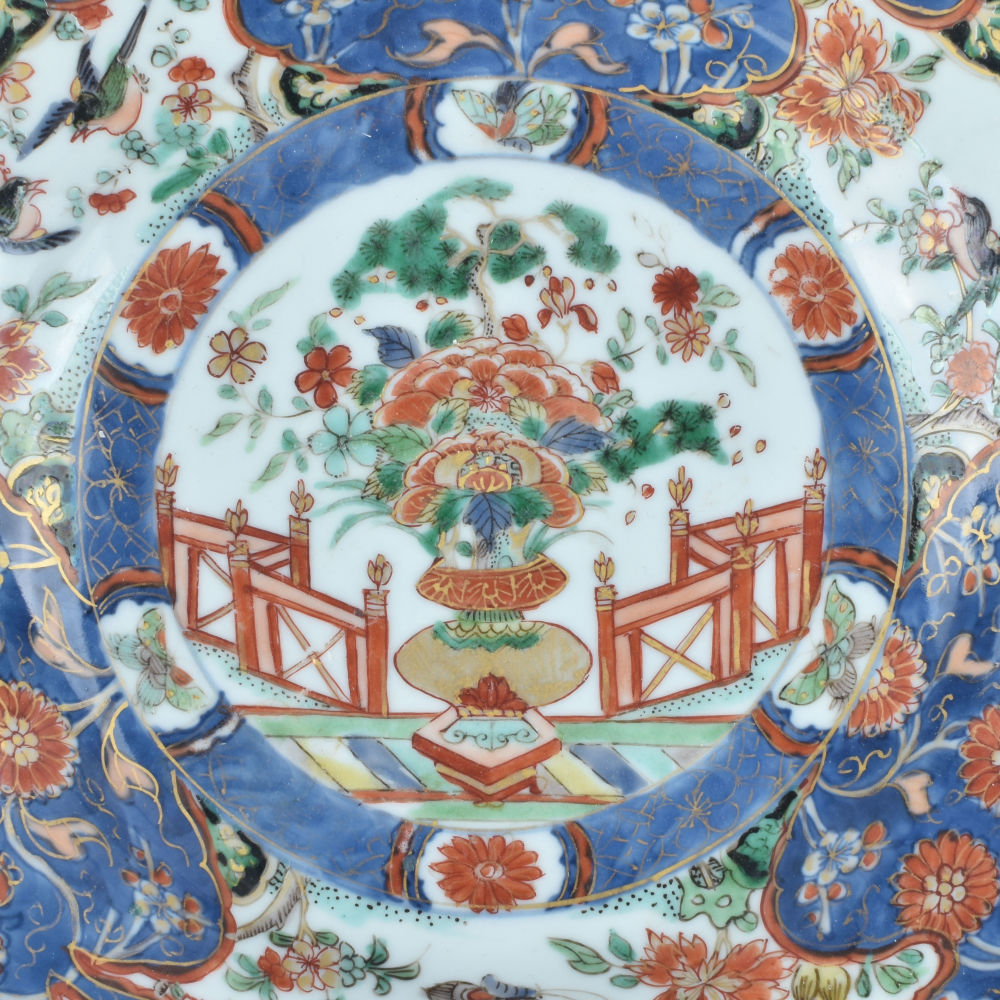 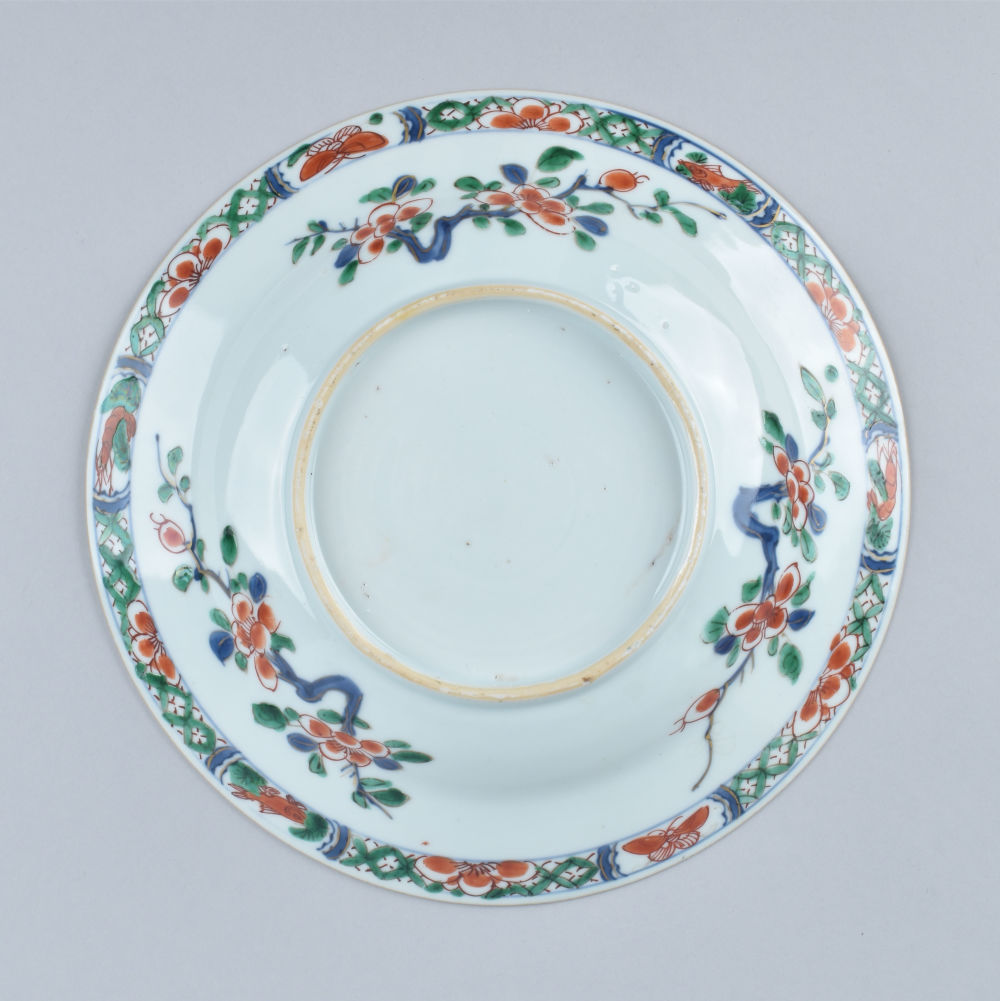 Painted in the famille verte palette and gilt with a jardiniere of peonies, chrysanthemums, pine and others flowers in a fenced garden to the center, the border with shaped panels of birds and butterflies in flowering gardens on underglazed-blue grounds reserved with chysanthemum sprays and scrolling foliage, the underside with flowering branches and panels of fish amongst aquatic weeds on a diaper ground.

Another dish is in the collection of the Metropolitan Museum of Art of New-York (from the Hans Syz Collection, Gift of Stephan B. Syz and John D. Syz, 1995, access number 1995.268.35).

This design made for the Continental market was inspired by Japanese export ceramics from the 17th century (Imari Kinrandé). The extensive use of gilding and the dark blue and red enamels illustrate the adoption of the Japanese Imari style in Chinese wares. This style became popular in Europe in the mid-seventeenth century, when warfare in China disrupted the kilns at Jingdezhen. Chinese potters incorporated the Imari style in their repertory to attract the lucrative European market.

This famous design was copied in Belvedere Warsaw Faience in 1776, most notably in later services for the Polish King Stanislaw II or for Sultan Abdul Hamid I of Turkey, which has consequently resulted in this design being known as the “Stanislaw” pattern. A plate from the “Poniatowski service” is in the collection of the Metropolitan Museum of Art of New-York.

This historical pattern became famous and the Venetian Cozzi factory copied it around 1770. Bayeux (Metropolitan Museum of NYC, access number 1995.268.39) and Samson copied it as well at the end of the 19th century (see Christie’s, Asian Decorative Arts, 14 february 2012, London, lot 224).