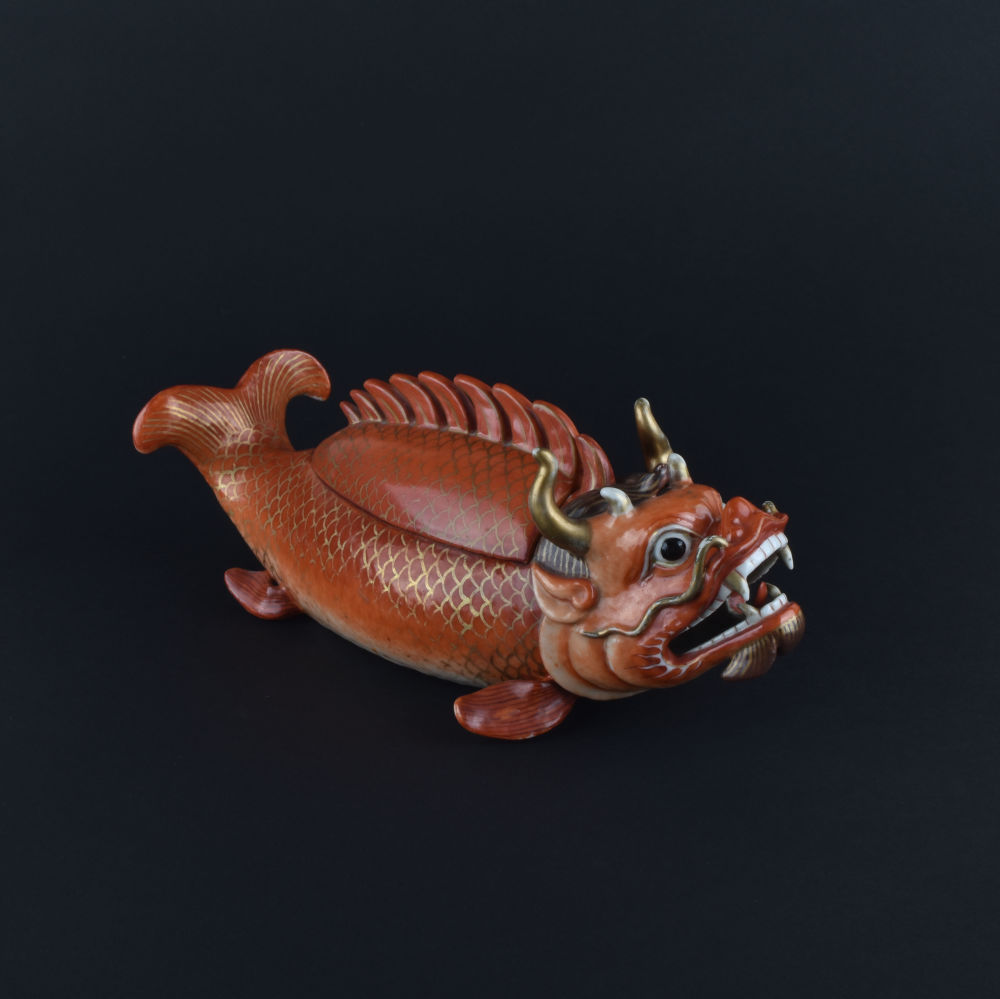 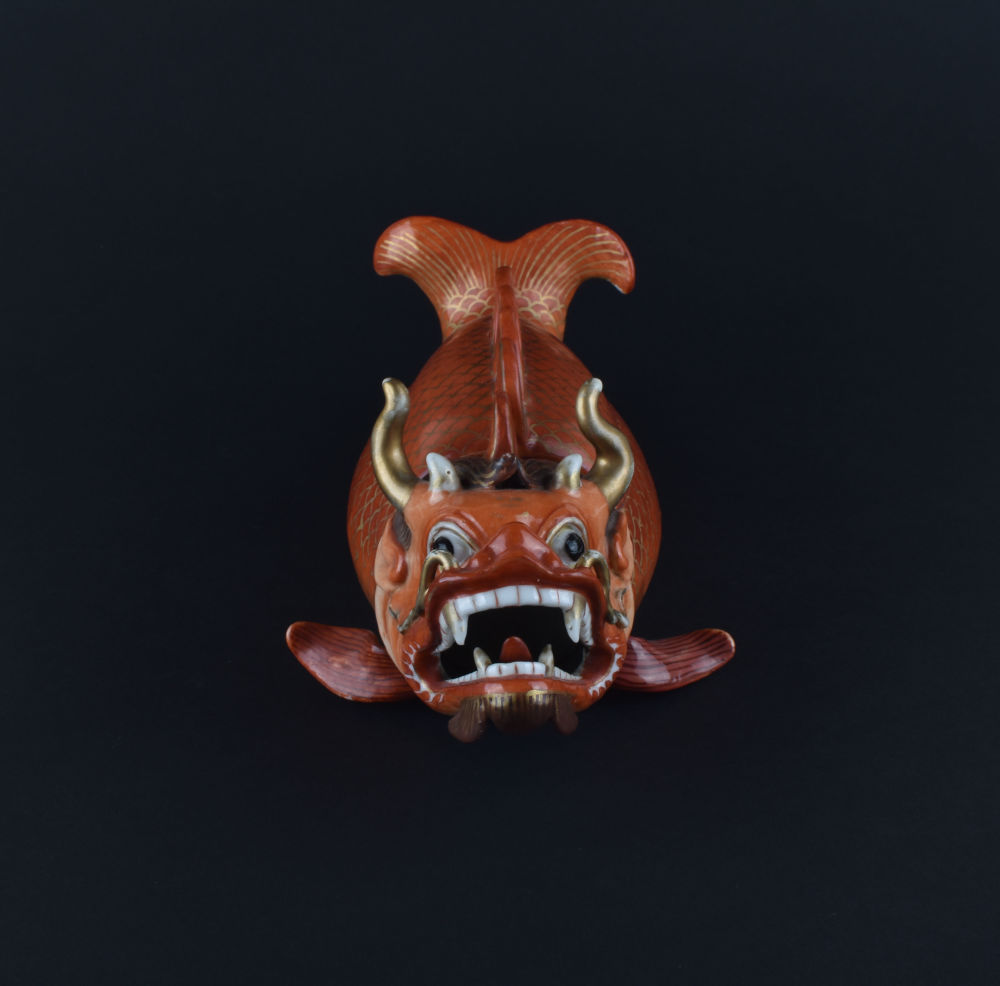 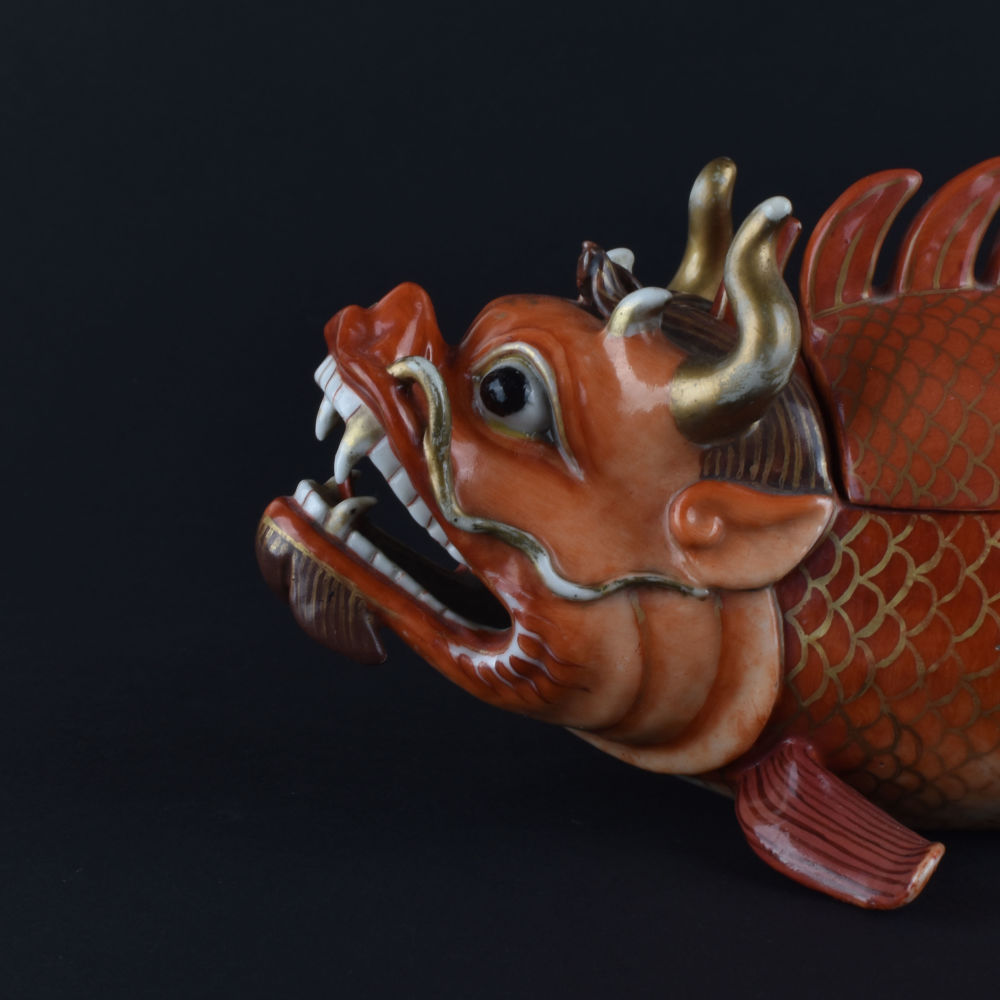 The tureen shaped like a fish with a ferocious-looking dragon’s head with two horns, raised tail, nose and jaw, with an open mouth showing a set of teeth with highly developed fangs, raised tongue and protruding eyes with black pupils, on the forehead, the character wang meaning king or sovereign.

A pair of this model with trays is in the RA Collection of Chinese Ceramics, and illustrated by Jorge Welsh and Maria Antónia Pinto de Matos in A Collector’s Vision, Jorge Welsh Oriental Books, 2011, p 110. This pair of tureens was exhibited last year at the Prada Fondation at the exhibition The Porcelain Room (Italy, Milano).

A tureen (without tray) was in The James Sowell Collection (from Jorge Welsh), and published by Michael Cohen and William Motley in Mandarin and Menagerie – Chinese and Japanese Export Ceramics Figures, Cohen & Cohen, London, 2008, p. 204, no. 15.3.

A pair of trays (without tureen), from the T. L. Cobb Collection (Newbridge House, Donabate, Co. Dublin) were published by  Stuart Marchant in 90th Anniversary Exhibition of Chinese Export Porcelain, 2015, p. 76, no. 49.

A single tray was offered by our gallery in 2019, inventory number (C160) and illustrated on our website.

There is an old Chinese legend about a carp which transforms into a dragon and climbs a waterfall on its way to the upper reaches of the Yellow River, it is thus one of the symbols of the scholar, who pursues his studies through hardships. The subject is also associated with the rebus yuhualong, ‘fish transforming into dragon’, which implies the wish for success in the civil service examinations. During the Qing dynasty, many are the objects for the scholar’s desk that take the shape of a carp, to give him courage and urge him to persevere.