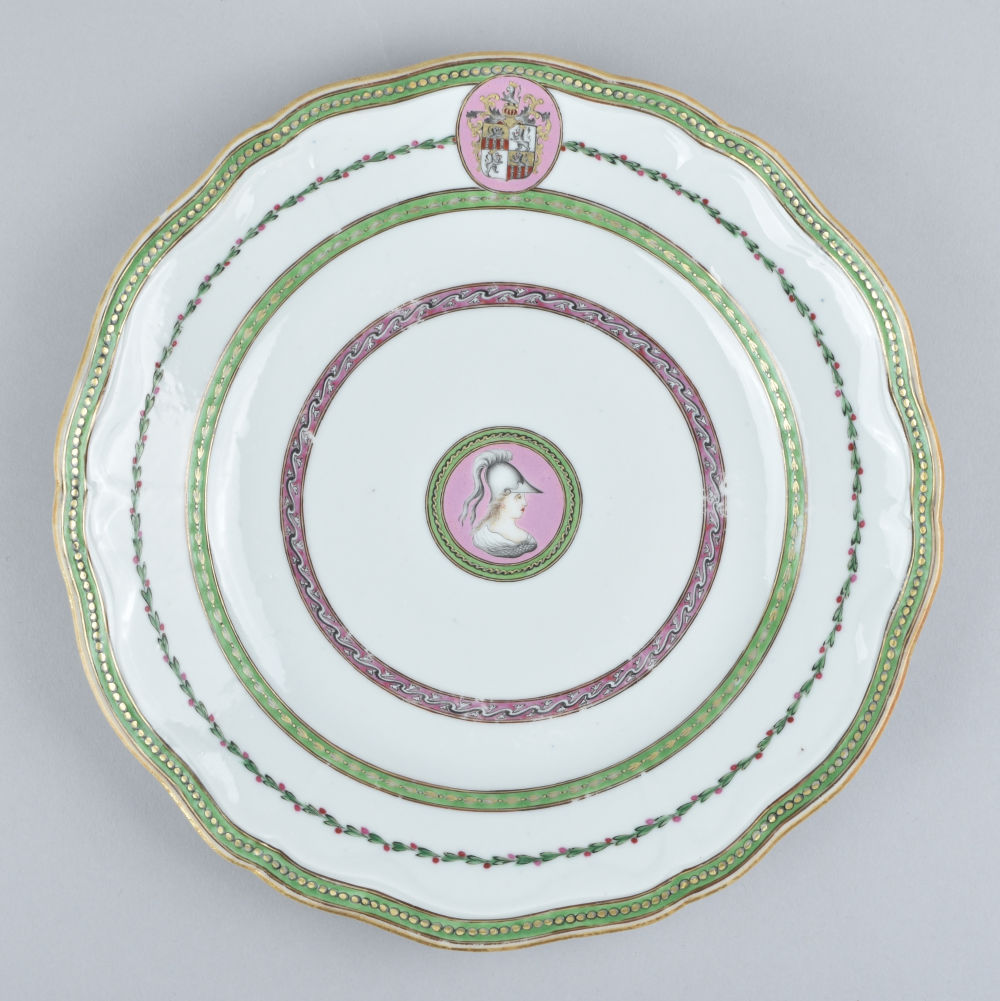 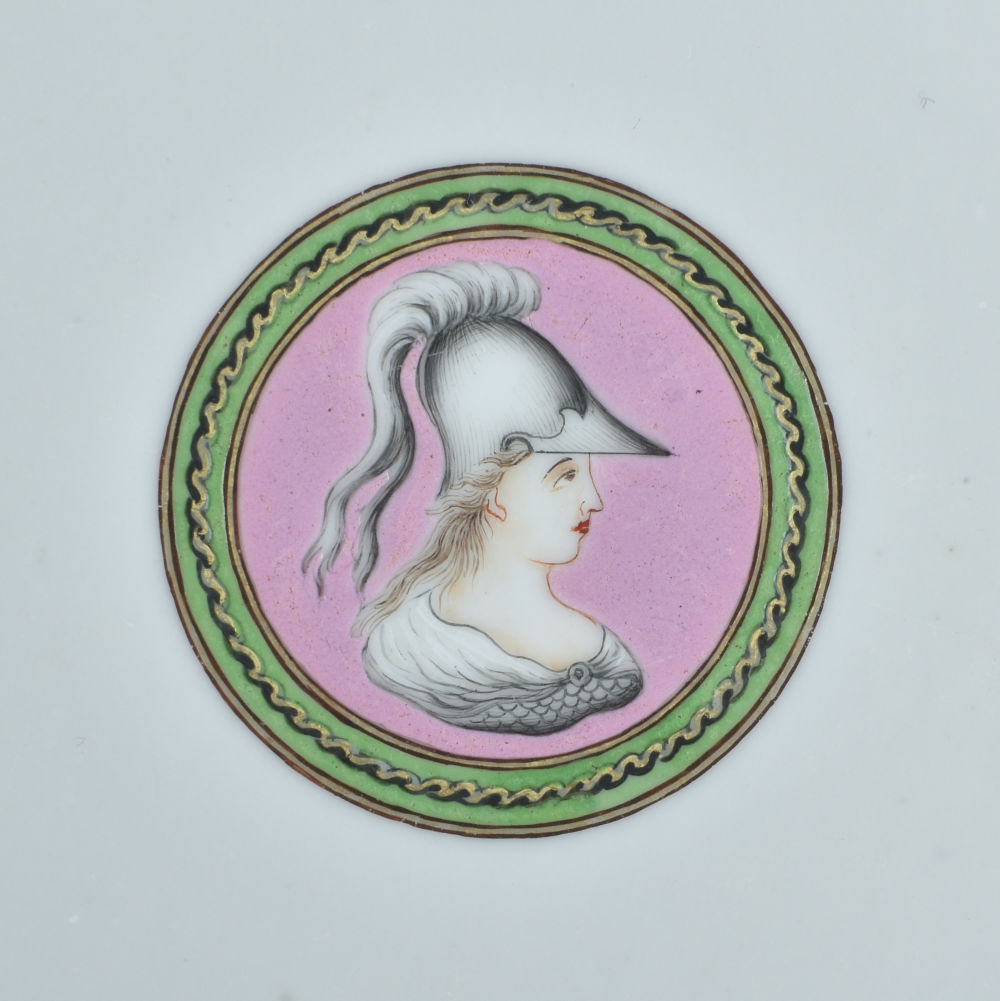 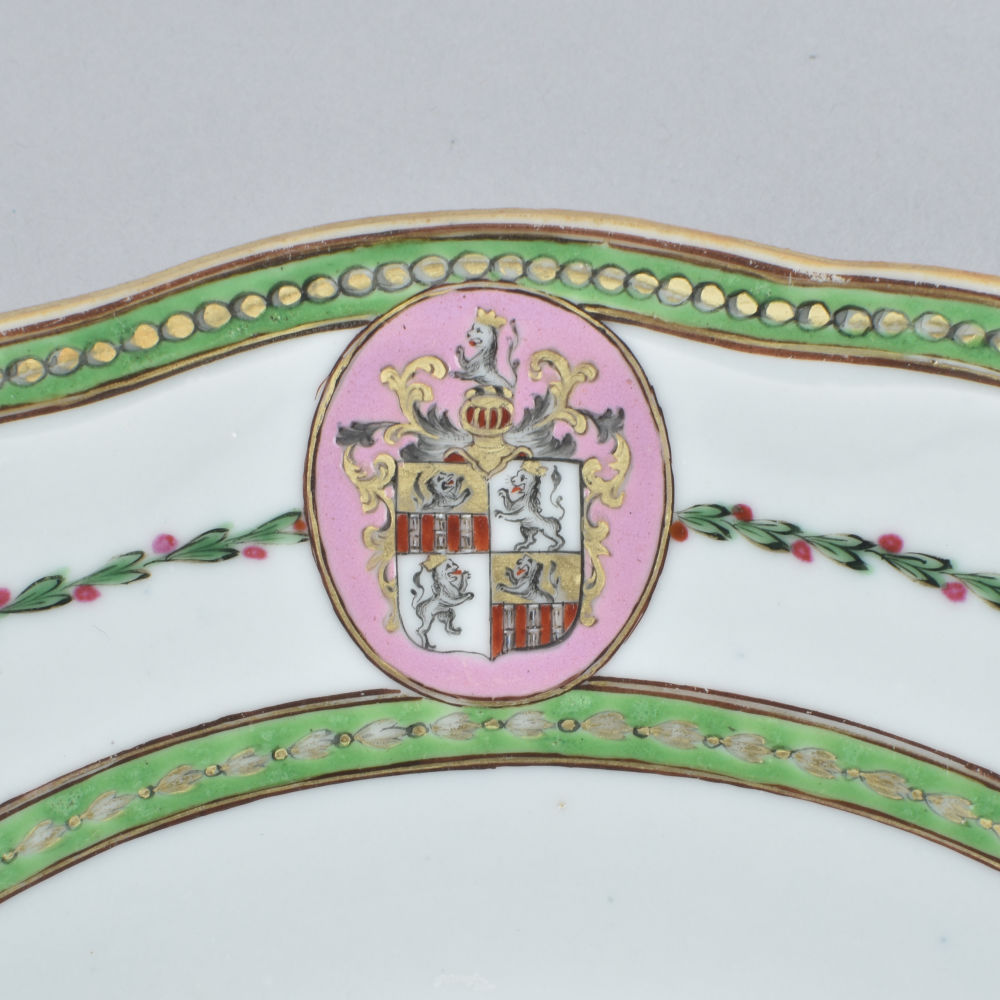 Decorated in the famille rose palette, in overglaze polychrome enamels, including pink, green, iron red, black and gold. At the centre is a large medallion with a wavy frieze framed by gold circles enclosing the bust-length portrait of the Roman goddess Minerva wearing a Corinthian helmet in a pink ground. There is also a pink border with wavy motifs reserved on white surrounding the portrait and another band with golden leaf branches around the cavetto. The rim is decorated with a stylized garland border and a gilt-pearl border on a green ground around the gilt edge. At the top is a pink, oval medallion enclosing the coat of arms of Peter van Hemert.

This Chinese porcelain service may have been ordered an important element of the neoclassical decoration of Brede House. Neoclassical figures on circular medallions with colourfull grounds, were used as a main decorative motif in major European ceramics factories as for example, the famous service arabesques, commissioned by the french king Louis XV to Sèvres Manufactory.

Peter van Hermert (1734-1810) a member of a powerful merchant family, was the son of Joost van Hemert (1696-1775), a self-made Dutch trader and owner of the firm Joost van Hermert & Sons in Copenhague. During his career, Joost was the director  of several trading companies including the Danish Asiatic Company (Asiatisk Kompagni), between 1743 and 1752, the West India and Guinea Company (Vestindisk Kompagni) between 1747 and 1754 and the African Company (Afrikanske Company) from 1755 to 1767. This finial position overlapped with his directorship from 1757 to 1769 of the General Trading Company (Des almindelige Handelskompagni), a Dano-Norwegian company created to administer trade in Greenland. Following in his father’s footsteps, in 1763, Peter was appointed as an agent to the Danish Justice Council and owned shares in the Asiatic Company that went up fourfold in value between 1772 and 1781. From 1776 to 1783, je was the director of the Asiatic trading Company.

He owned Brede House, designed by the court architect Andreas Kirkerup (1749-1810), and the house’s neoclassical interior decoration was probably done by Joseph Christian Lillie (1760-1827). In 1805, due to bankruptcy, Peter van hemert saw his possessions auctioned off. This service was likely dispersed in the same year.