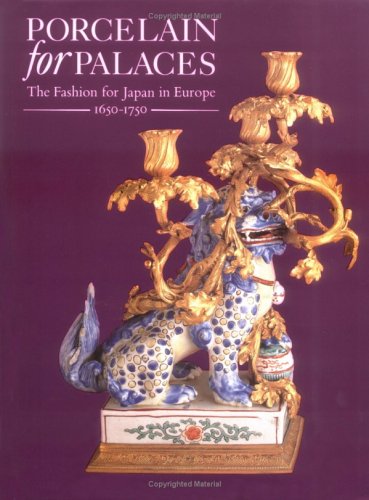 Porcelain for Palaces: The Fashion for Japan in Europe 1650-1750

Between the mid-17th and mid-18th centuries Japanese and Chinese porcelains were a notable sight in the great houses of Europe; amid the general enthusiasm for things oriental, princes had become major collectors of porcelain, and decoration was adapted for its display. Japanese porcelain was sought by collectors during its period of production, for instance by Augustus the Strong, much of whose vast collection is today still at Dresden. Here, over 350 pieces have been included from many of the oldest and most famous collections in Europe to demonstrate the range of imported Japanese wares and to show both the spread of the fashion for collecting porcelain and the styles that had greatest effect on porcelain production in Europe. It was the import of huge quantities of Chinese blue-and-white wares in the first half of the 17th century that ensured the onset ‘oriental mania’ in Europe. However, in about 1659, after the interruption of Chinese output at the fall of the Ming dynasty in 1644, the full export trade in Japanese porcelain began. From the palette of the early Arita enamellers gradually arose the sparing, asymmetrical designs and fresh, brilliant colours that we call ‘Kakiemon’. From the same beginnings grew the distinctive style known as ‘Imari’, a term which embraces both the early enamelled ware and the increasingly large and richly enamelled and gilt pieces that followed. The demand for such wares can be verified by considering the syles of porcelain most imitated (and adapted) by new porcelain factories in Europe. Many wares were later fitted in Europe with mounts of silver or gilt bronze, often to adapt them to elaborate decorative schemes. The ‘delfware’ pottery of Holland and other countries now briefly followed the Japanese. Then, from 1709, there was fine quality porcelain produced at Meissen, Kakiemon shapes and designs were much copied there and in France, notably at Chantilly and St Cloud, and by around 1750 the fashion was current also in England at the new factories of Chelsea, Bow and Worcester. The effect of Japanese, as of Chinese, porcelain in Europe, was such that certain elements of Japanese styles became firmly incorporated into the European repertoire. By charing these styles, Porcelain of Palaces casts new light on the early development of European porcelain.