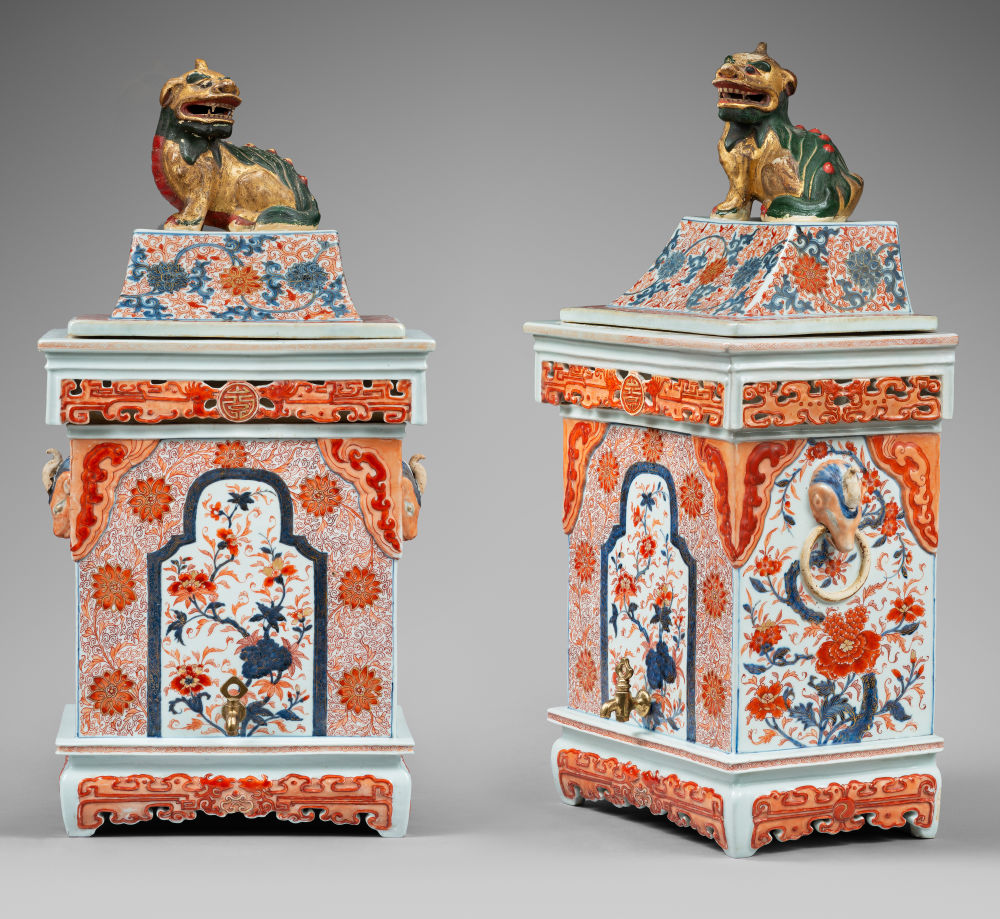 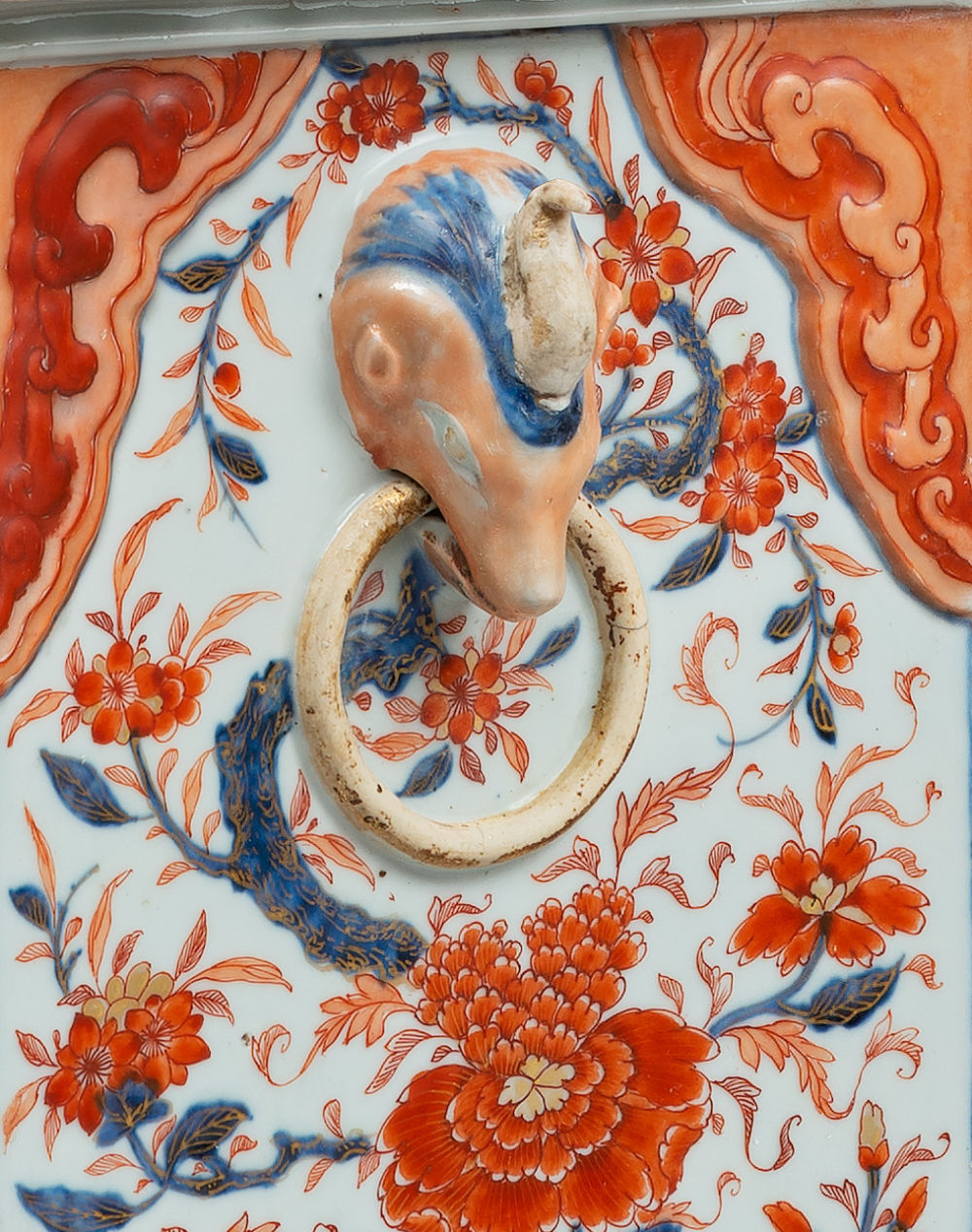 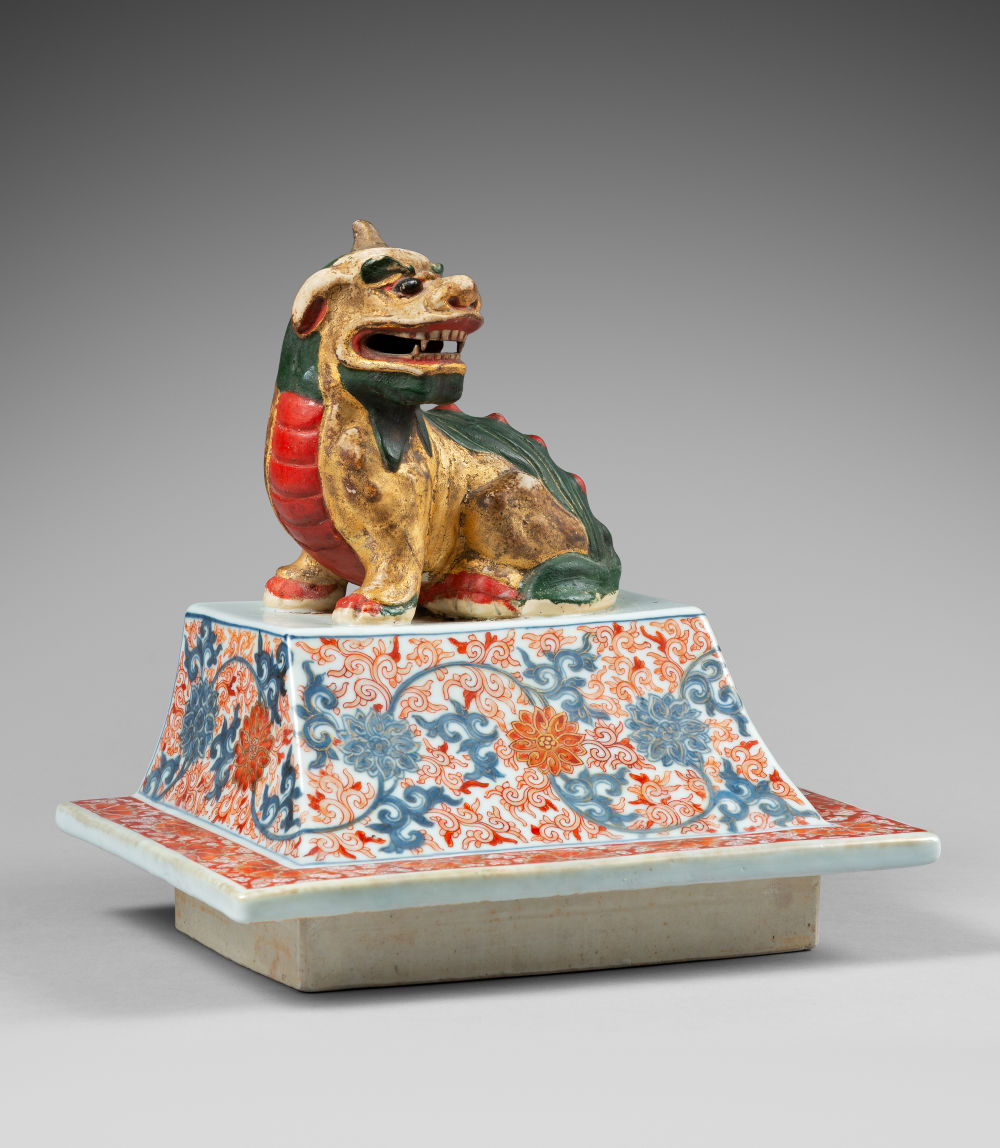 Chinese porcelain fountains for the European market, such as these two magnificent examples, were produced for a very short period of time. Nearly all appear to be from the same workshop and from the same molds. These two identical examples, if they have survived together since they were ordered, imply the original owner would have had lavish dinners in a very large dining room.

The basic form was based on a European original, but the sculptural and two-dimensional decorations are purely Chinese. The slopping lid, the open-work moldings of facing dragons on the top panels, the shou (longevity) character between the dragons on the front, the mythical animals forming the finial (which face left in all examples) and the fixed-ring handles, and the bowed ‘stand’ created as an integral part of the fountain are Chinese in origin.

The glaze decoration is Chinese Imari, a palette of underglaze blue, over-glaze translucent enamels of iron red and gilding. The color scheme was developed by Japanese ceramic decorators when Western customers turned to them to fill orders during a period when the kilns in China were destabilized. The underglaze blue arched panel on the front is typically found on other fountains and recalls influences from Persian architecture. Within the arch is a large spray of flowers, with a similar motif on both sides. Surrounding the arch are iron-red and orange peony blossoms on an intricate groundwork of scrolls and leaves.

The finials, a mythical unicorn, may be intended to represent a pixiu. A pixiu has the head of a dragon, the body of a lion, and one antler (male), or two antlers (female), and look like strong, winged lions, [1] though the examples here are wingless. The animal heads on the sides, holding the attached rings in their mouths, have heads closer to a deer. These may represent the djeiran, a mythical central Asian one-horned antelope that began to appear in the 7th century and continued in use as a motif until the Yuan dynasty (1115-1234); so its appearance on these much later fountains would be inexplicable. In fact, the representation of mythical animals is fluid and complex. Another related creature is the xièzhì, a white creature with a dragon’s head, a lion’s body, a bear’s tail, a mane, paws and a single horn.[2] That most finials on fountains were left in the white biscuit might imply they were meant to represent the white xièzhì. The important element is the horn (jījiao), as the character jī can be interpreted as meaning lucky or auspicious.[3]

Lion finials frequently found on massive vases and smaller lidded porcelains were sometimes left in the bisque but could be gilded or decorated with polychrome enamels. Animal-form finials on fountains are most often left in the biscuit, although several are known with later cold-painting. The present examples are most unusual as they have been very carefully decorated in gilt, green and red, probably in Europe at a later date, but most likely in the 18th century. A pair of massive covered jars with lion finials decorated in a similar fashion as the present pair was sold at Sotheby’s.[4]

The terms ‘fountain’ and ‘cistern’ are sometimes used interchangeably.[5] However, ‘fountain’ comes from the Latin ‘fons,’ meaning source or spring, and refers to a decorative reservoir that discharges water artificially. In smaller forms for the wall or table, water is accessed with a spigot; on a large scale, a fountain is a construction with a constant supply of water, either for drinking or for decorative purposes. The most common Chinese export porcelain fountain is a wall-mounted, half-vase form most often with a matching basin for catching waste water. Large vase-form fountains with matching basins decorated with designed by Cornelis Pronk are well known.[6]

Fountains, such as these current examples would stand on a side table or be hung on a wall and used for washing hands between courses. The backs of each are pierced with two holes, between which is an openwork cash, or coin, motif. An interior wall covers these holes to make the fountain watertight. Although these are constructed to be hung on the wall, the weight of the porcelain, even without water, would have made that impractical. The Chinese may have been closely following the form of the lighter metal fountain given to them as a model. Later European fountains, either in round or rectangular forms, are known in zinc, copper or brass.

These fountains are sometimes referred to as cisterns, but that term is defined as an artificial reservoir for static water.[7]“Cistern” was used in a 1732 inventory, referring to an “old Japan Cistern for Bottles.”[8]

As yet there is no documentary evidence for ordering Chinese fountains. One of the earliest records is a 1763 London auction where an example was listed as, “No. 12. A blue and white cistern of the find old japan china with a lion top.”[9] A 1767 sale included, “169. Une Fontaine de Porcelain, nouveau Japon, à fleurs coloriées sur un fond blanc: elle est aussi montée en argent.”[10] If one assumes the owners possessed these for some years, the date would be mid-eighteenth century at the latest.

[5] George Savage and Harold Newman, An Illustrated Dictionary of Ceramics, London, 1985, 77, where they state examples were made in maiolica or faience in Italy, France, and Spain from the sixteenth century. A demilune-shaped Southwark delftware example made to be hung on the wall is dated 1641: British Museum, accession no. 1887,0210.125.

[8] A True and Exact Particular and Inventory Of all and singular the Effects whatsoever, of Christopher Warren, London. S. Buckley, 1732, 32. Chinese ceramics were often identified as “Japan,” but from descriptions were obviously of Chinese origin. Another auction referred to “Japan China,” “Dresden China,” “Chelsea China” and “Derbyshire China,” see: “1439 Curiously Shaped Antique Indian China Fountain, richly enamelled,” in Catalogue of the Valuable Library of the Late Lord Cockburn, sold at auction by Mr. T. Nisbet, Edinburgh, November 27, 1854, 72.