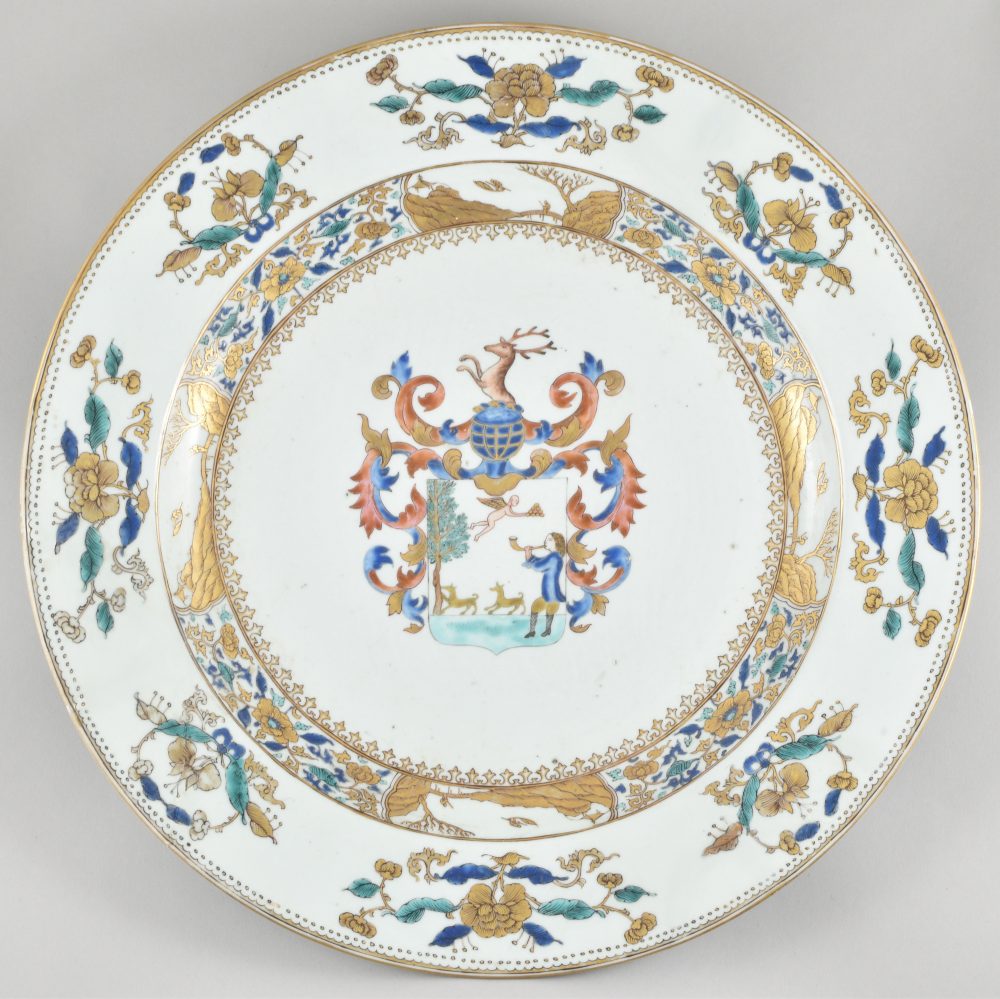 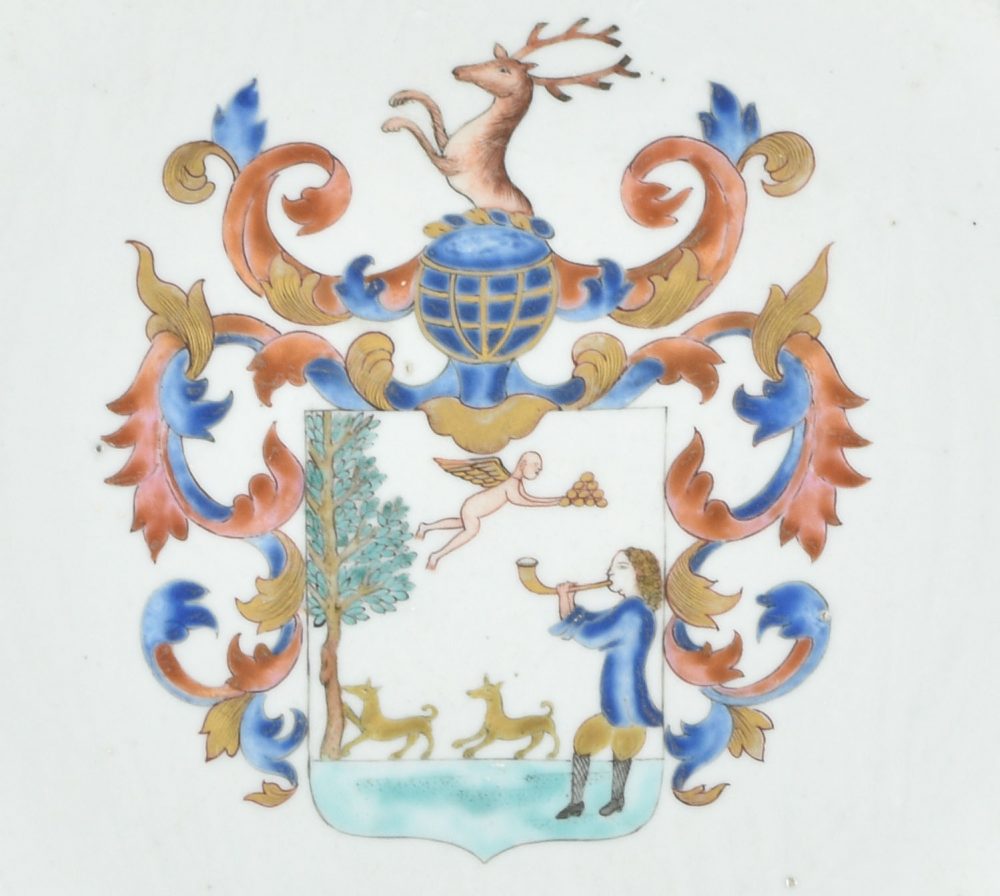 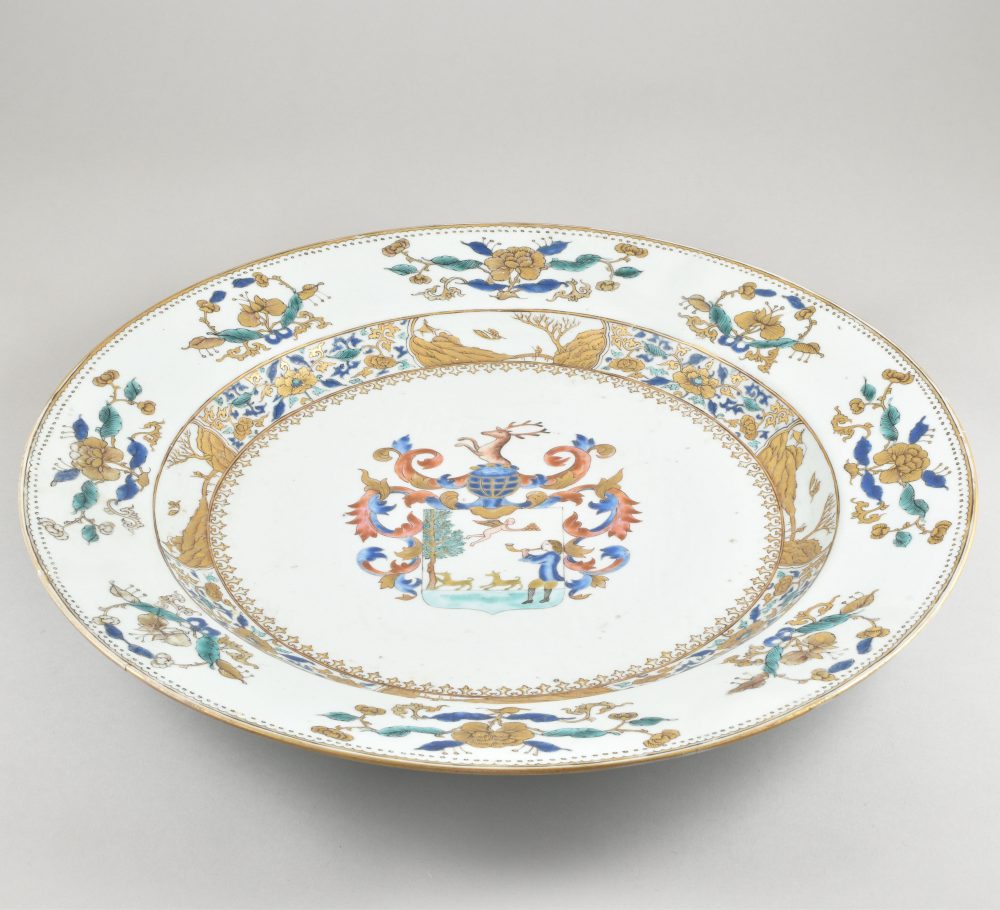 Decorated in the famille rose palette and gilt, the coat of arms in the centre of the plate with a man, or huntsman, blowing a horn with two hounds and a tree on a green base with flying angel ; the crest is a demi stag. Red and gold mantling of leaves and scrollwork surrounds the shield, in a traditional style which was common in 17th-century Dutch herald. On the rim, were are eight flowers sprays, surrounded by an engrailed border with dots. At the cavetto there is a band of flowers and tendrils with reserves and landscapes, whereas the centre of the charger is surrounded by a genuine spearhead border.

Only one plate from this service looks to be repertoried, making this charger an exceptional document for the Dutch Market, especially considering the size of this charger (16.53 in. / 42 cm).

See Jochem Kroes, Chinese Armorial Porcelain For the Dutch Market: Chinese Porcelain with Coats of Arms of Dutch Market, p. 136, no. 41, for a description of this service.

The armorial style, the form of the shield and the pictural nature of the armorial charges and the meaning is typically of the Dutch market style. Several Dutch families (Verhage, Kooij, Jager, Wildschut, Fortuijn, Rottgers and Van der Jagt) bore similar arms but the Verhage coat of arms are the closer of the one painted on this porcelain.

As shown in the Guidebook of the Middelburg Baker’s guild of 1737, Cornelis Verhage bore the following arms : on a silver background a huntsman blowing a horn with a stag and a hound between two trees on a green base ; the crest a demi hound. Eight years later, in 1745 when he was a member of the Bakers’ Guild of Vlissingen, he bore a variation of these arms with a flying bird which has been replaced by a flying angel on this porcelain. The hound crest was also substituted with a stag.

Johannes Verhage from Vlissingen, who was oploper on the East Indiaman Nieuwvliet which sailed for China in 1733, is the most likely to have commissioned this service. It is therefore very likely that Johannes Verhage, although he was a low ranking member of the crew, acted as an intermediary, placing this order on behalf of Cornelis Verhage, who might have been a relative of his.