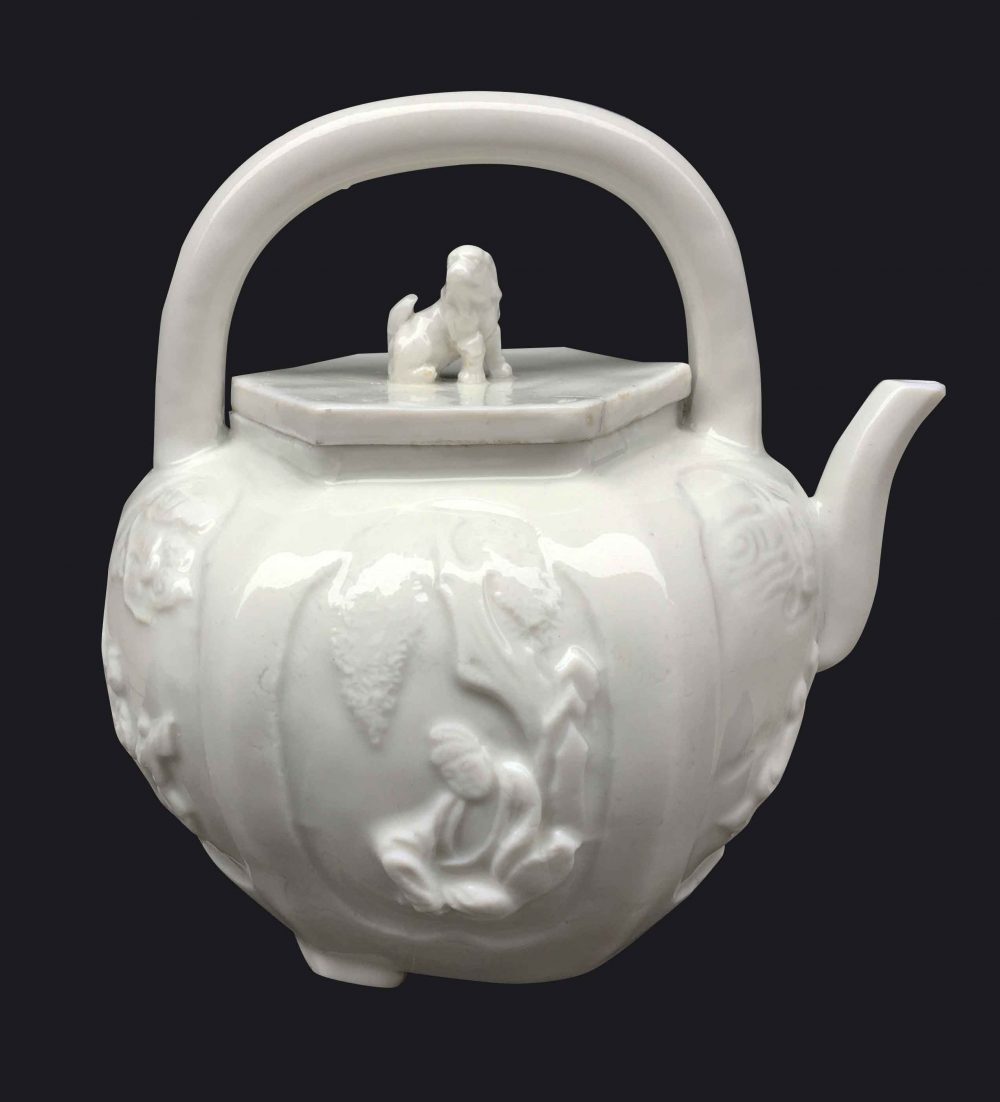 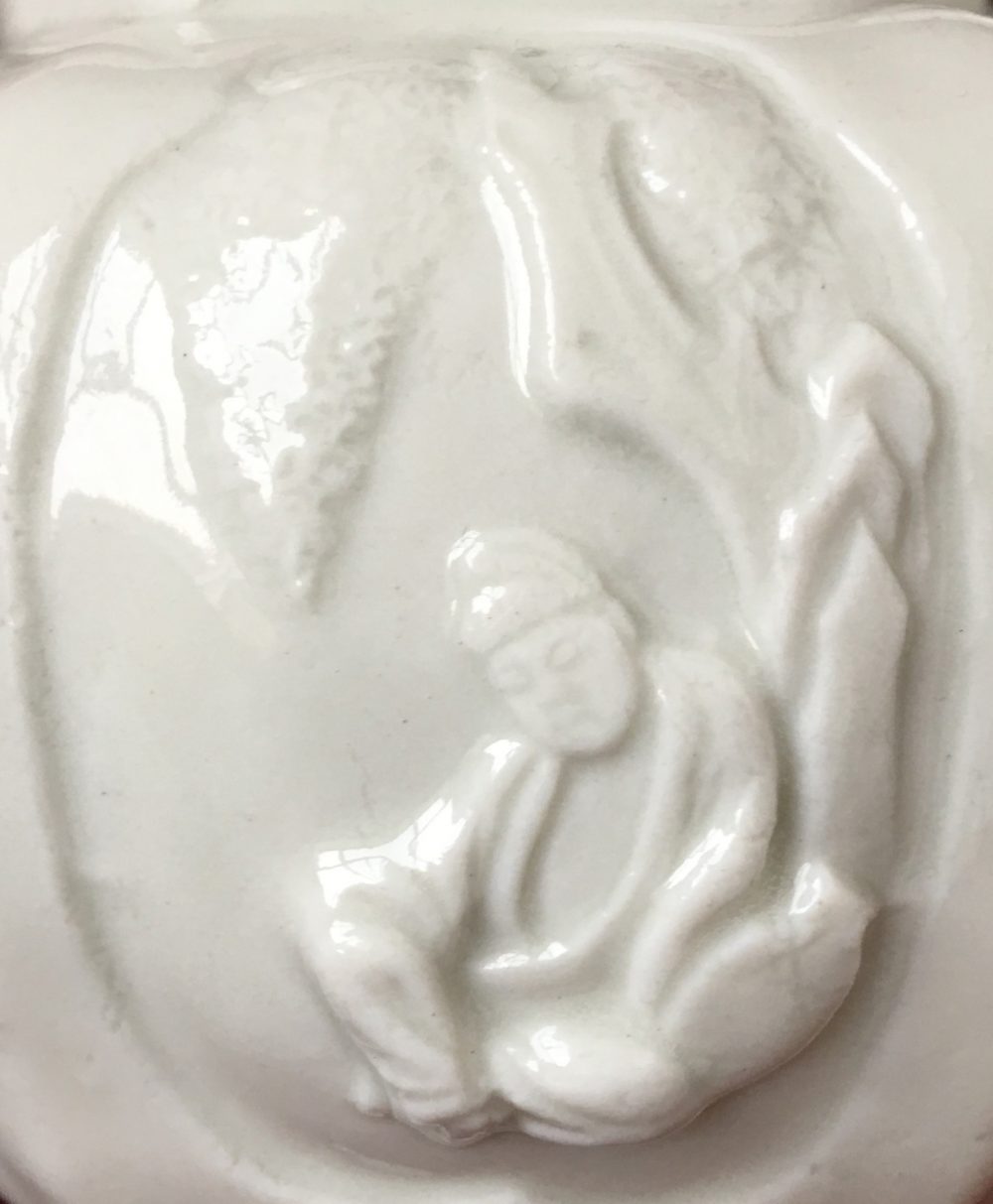 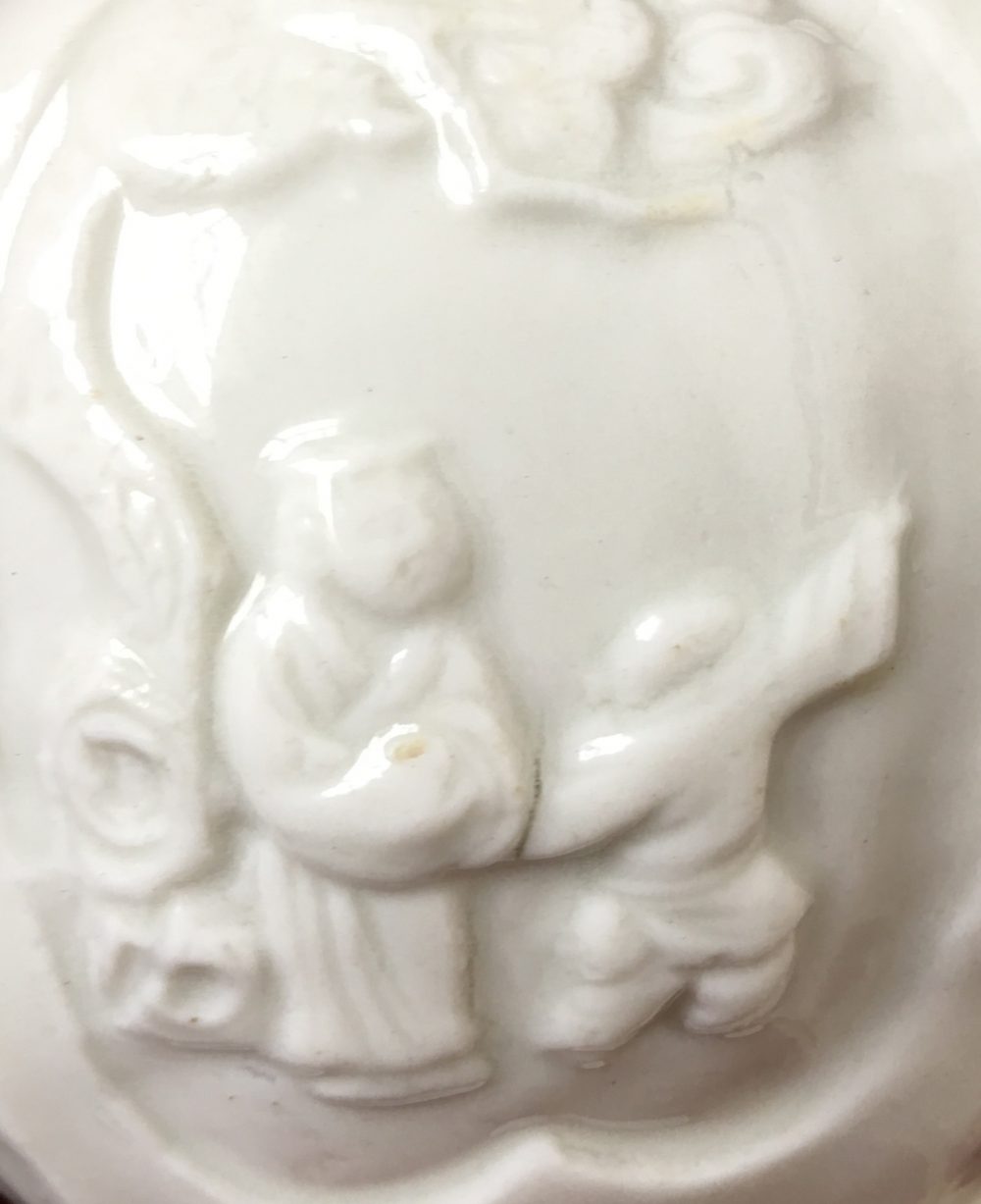 A Chinese white porcelain (blanc-de-Chine) hexagonal wine pot and cover with flat base, three corner feet, and six rounded sides. Each side moulded with a recessed relief design within a shaped border, rising to a low, hexagonal mouth. The matching flat cover with infitting unglazed flange has a knob in the form of a seated lion. An overhead flattened tubular handle rises from the shoulder, to which is also attached the short, curved, rising spout. The panel designs represent scholars seated viewing the landscape, or with attendants preparing tea or carrying a wrapped qin (musical instrument).

We have listed severals similar wine pots in prestigious museum’s collections and private collections (two of them from royal collections). 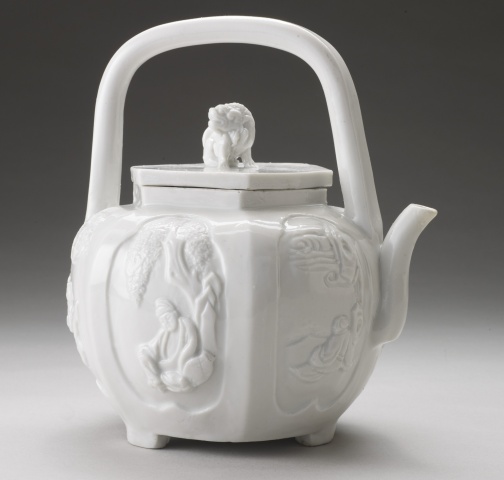 One, with figures, listed as a “teapot”, from the collection of Sir Augustus Wollaston Franks (curator, 1826 – 1897), is held on at the British Museum (access number Franks.682). The Donnelly Gift to the British Museum (1980.7.23.339) includes an other example with molded flowers and rocks decoration. 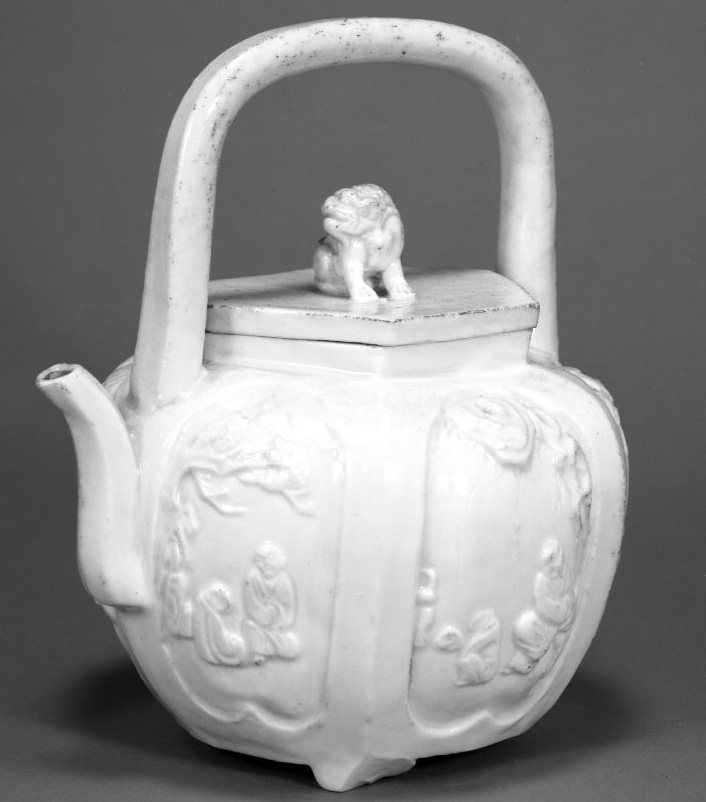 Another one, again from the collection of P.J. Donnelly, also reputed for his knowledge about Blanc de Chine, was recently sold at Sotheby’s NYC, Important Chinese Art, 13 september 2016, lot 299 (Property from the collection of Richard Lehman Gray, sold 11.250 USD). This winepot was published in Courts and Colonies: The William and Mary Style in Holland, England, and America (Cooper-Hewitt Museum, New York, 1988, cat. no. 205), and in Blanc de Chine: Divine Images in Porcelain (China Institute Gallery, New York, 2002, cat. no. 20). Another example, with European gilt metal mounts was sold at Sotheby’s NYC, 18th July 1980, lot 399.

An example, from the collection of the Duke of Devonshire, is held on at Blenheim Palace. 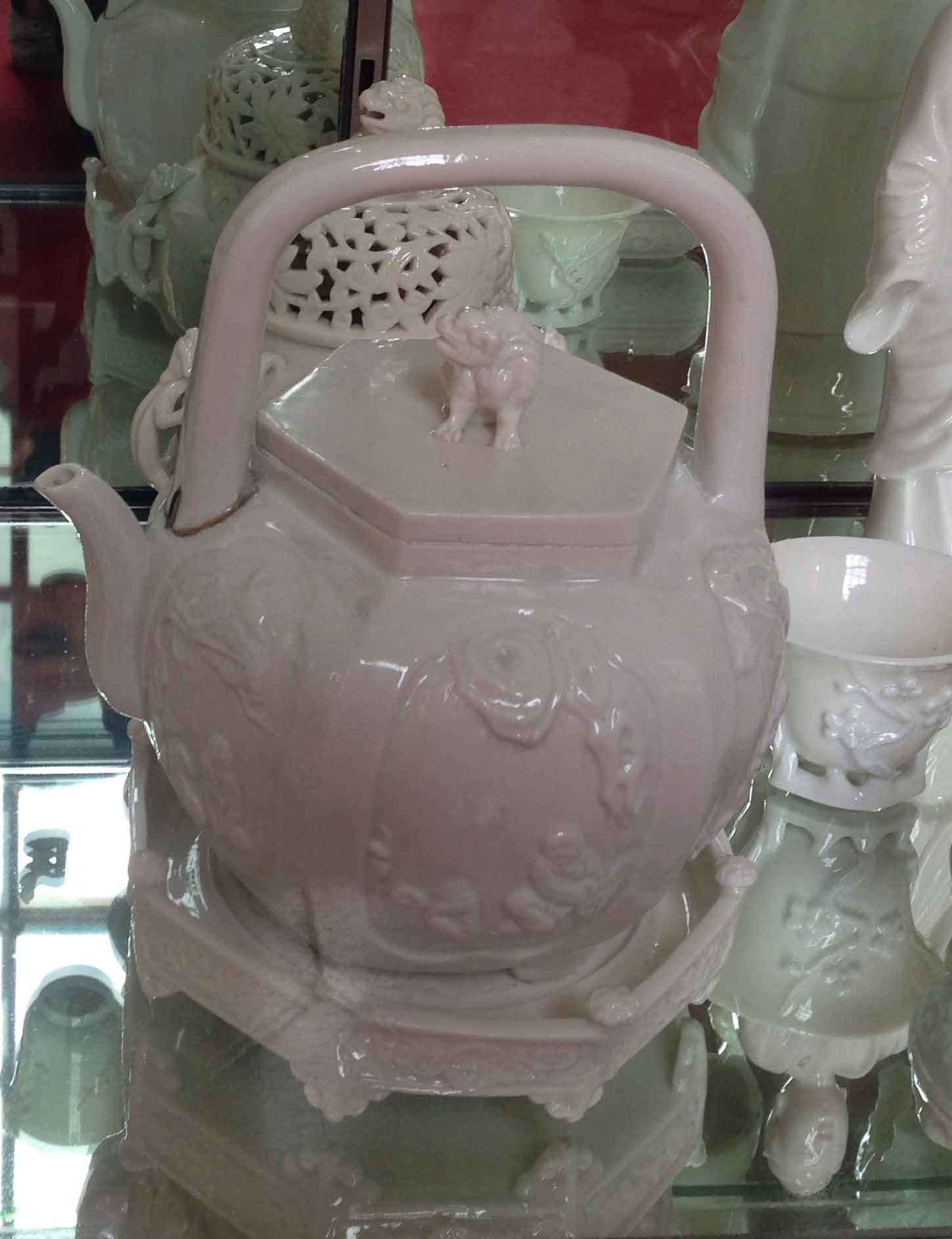 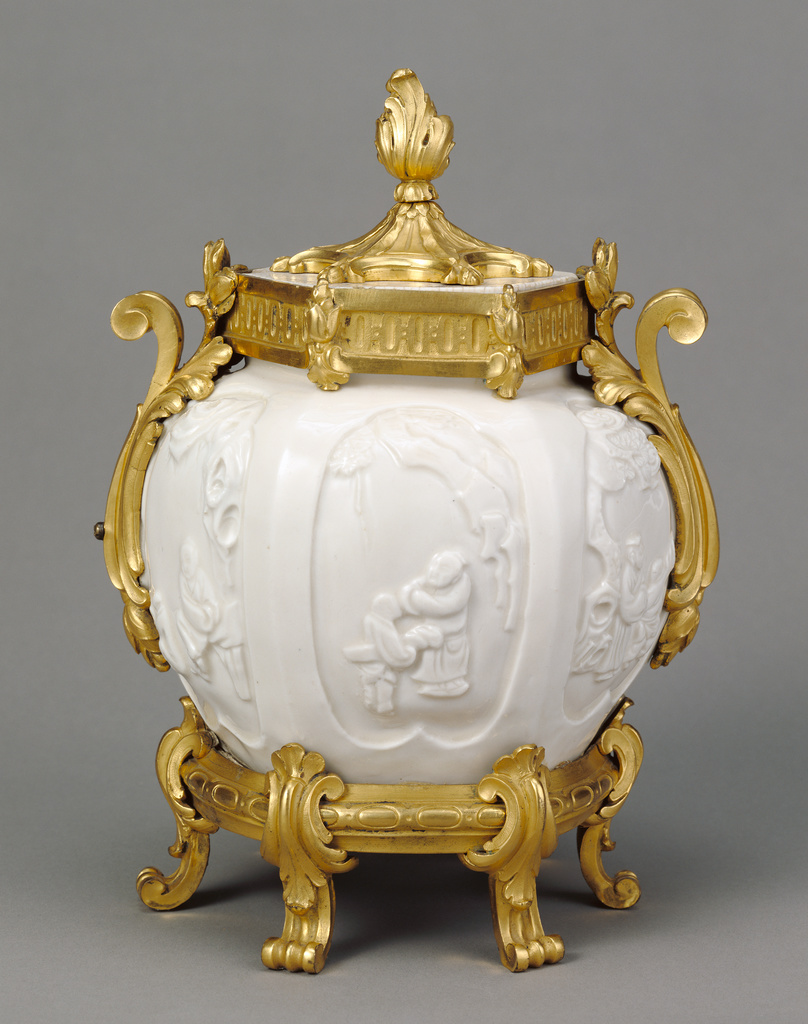 A last example, from the Hickley Collection (Singapour), is published by Kerr and Ayers in Blanc de Chine : Porcelain from Dehua (2002, p. 20, fig. 2).

These hexagonal wine pot, decorated with figures on six side panels, represents one of the two versions of this teapot (the others with flowers). By the early eighteenth century, Staffordshire potters had begun to copy this form. A closely model, with angular exists (Porzellansammlung).