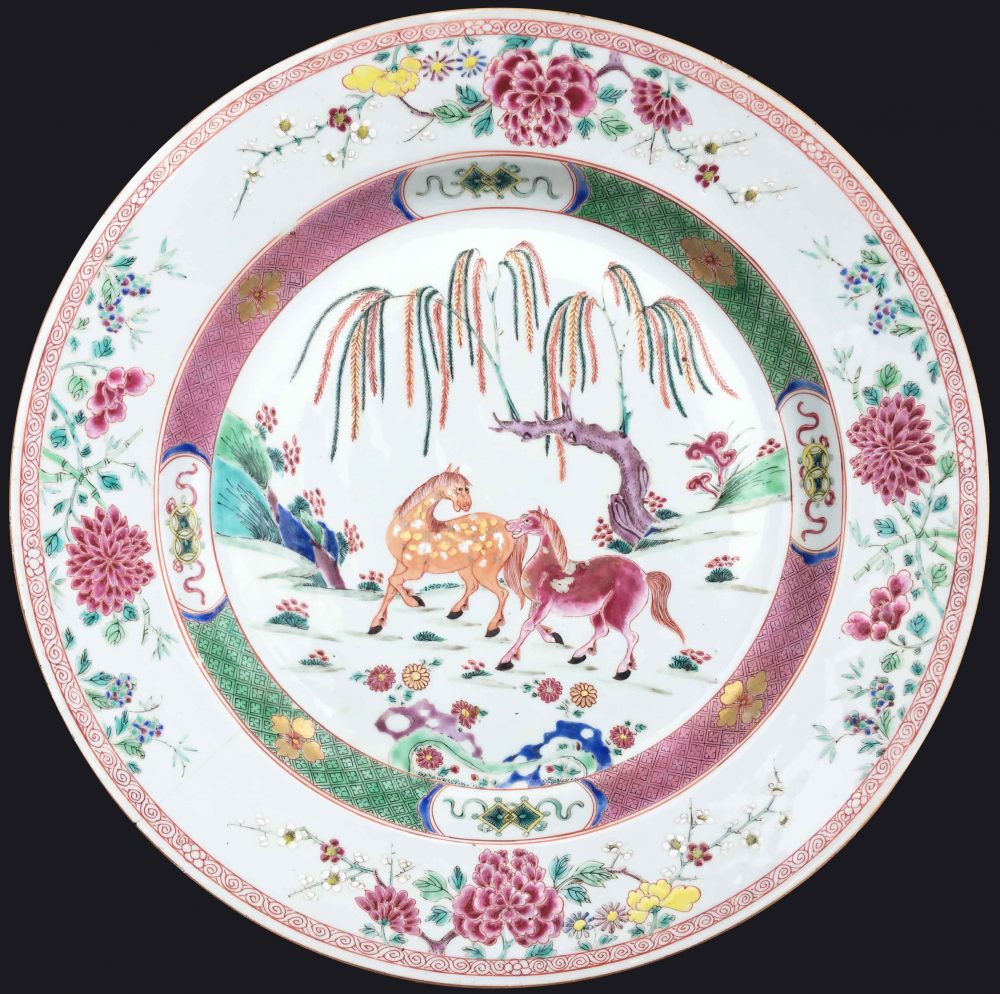 Brightly enamelled with a central scene of two horses gambolling, one a piebald in iron-red with gilt and white enamel speckles and one in pink and ruby enamel, beneath a large willow tree amongst rockwork, lingzhi fungus and flowers, encircled in the cavetto by cash and lozenge reserves on green and pink-diaper grounds with gilt flower heads, the flat everted rim with four flower sprays of peony, prunus, daisy, chrysanthemum and bamboo beneath an iron-red scroll band at the rim. This decoration includes translucent famille rose verte and opaque famille rose enamels, as well as characteristics of both families.

A pair of similar chargers, from the collection of R. de A. is illustrated by Jorge Welsh & Maria Antónia Pinto de Matos in The RA Collection of Chinese Ceramics, A Collector’s Vision, Volume I, no. 164, p. 356 (inv. NO 267).

Another pair of chargers is illustrated by William Motley in the Cohen & Cohen exhibition catalogue Think Pink, 2013, London, no. 37, p. 50.

A plate is illustrated by David S. Howard in The Choice of the Private Trader, the Private Market in Chinese Export Porcelain Illustrated from the Hodroff Collection, no. 39, p. 63.

Another pair of chargers was recently exhibited by Marchant (London), another one was exhibited by Polly Latham (USA).

The pattern might represent two of the Eight Horses of Wang Mu. The horses of King Mu of the Zhou Dynasty was a popular theme for porcelain decorations from the Transitional into the Yongzheng period (1723-35). The story originates from a historical romance, the Mu tianzhi zhuan (An Account of Emperor Mu), which describes the journeys of the fifth emperor of the Zhou dynasty (1023-983 BC) during which he met Xi Wangmu – the Queen Mother of the West – at Yaozhi (the Jade Pond). The story is about King (Wang) Mu, who dreamed of being an immortal God. He was determined to visit the heavenly paradise and taste the peaches of immortality. A brave charioteer named Zaofu used his chariot to carry the king to his destination. During these travels the emperor’s chariot was pulled by eight horses named after the color of their hair. Another account, the forth century book, the Shiyiji (Researches into Lost Records) has it that the horses’ names reflected their unusual talents; Number 1 gallops without touching the ground; Number 2 runs faster than birds; Number 3 goes especially fast at night; Number 4 goes as fast as the shadow of the sun; Number 5 is especially well-groomed with a splendid mane; Number 6 runs so fast that one can see a row of ten images of him; Number 7 rides on a cloud; Number 8 has wings.” The The Eight Horses of Wang Mu became a popular subject among later poets and artists and a symbol for the vehicle or journeys of any emperor.