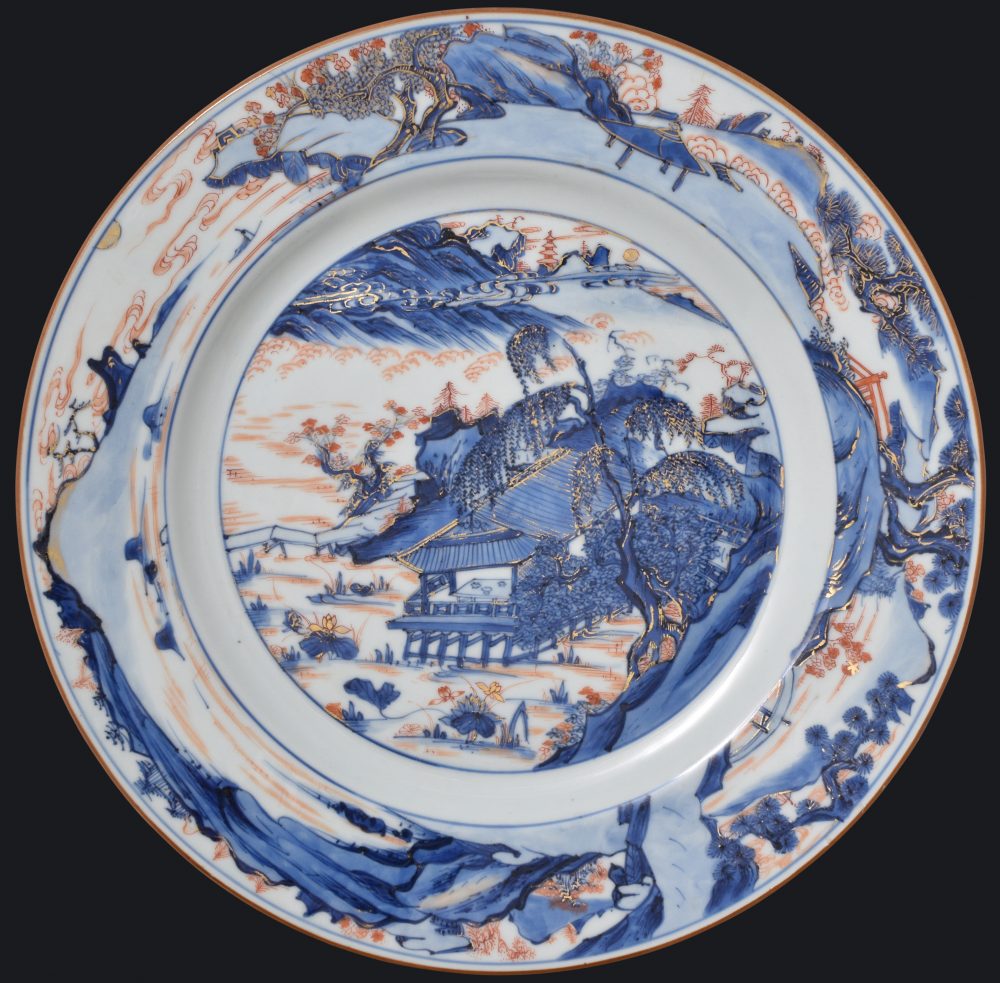 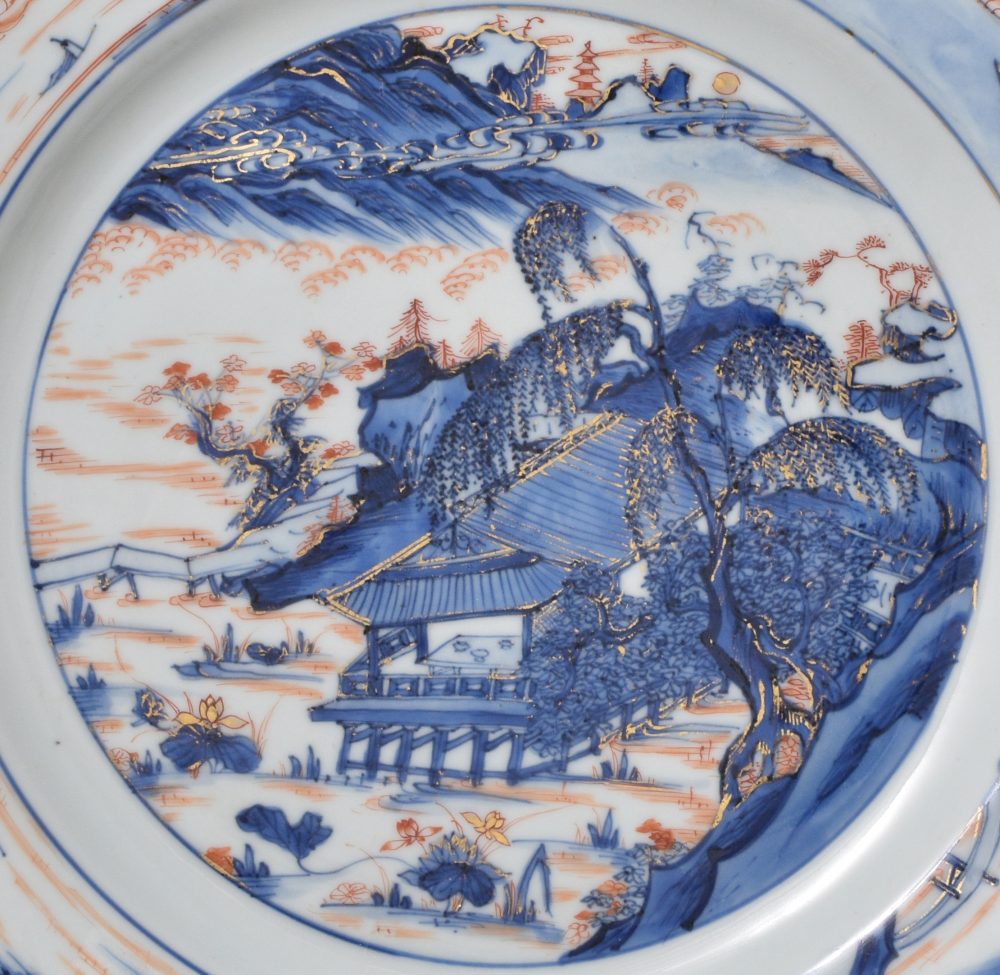 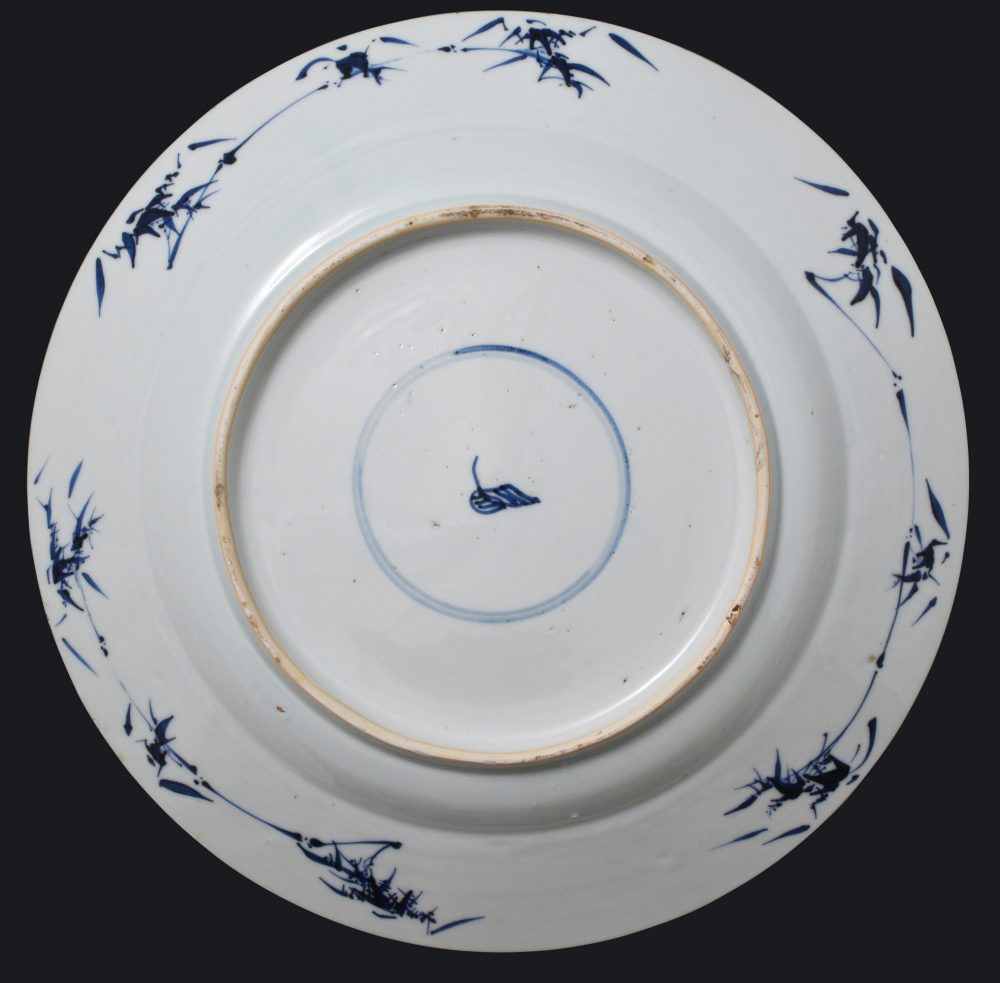 Decorated in underglaze blue, iron red and gilt, with a landscape to the center, and a continuous landscape scene on the rim.

The Chinese term for landscape is shanshui, mountains and water. Mountains are representative of the cosmic force of yang, with water representative of yin. The landscape was the domain of painters, particularly since the tenth century when the landscape became the pre-eminent mode of artistic expression among the Chinese scholarly literati elite. The calligraphic strokes used in landscape painting gave the artist the means of self-expression as well as self-cultivation.  Landscape painting for this reason was never intended to give the impression of a realistic landscape, as in Western painting, but rather mountains and water, yang and yang, the quintessential emblem of the cosmos. Depicted is a universal harmony made explicit by nature.

The historical background at the time was shaped by the political and ethical dilemma the Chinese elite faced in the middle of the seventeenth century, the fall of the Ming dynasty (1368-1644) and the establishment of the new dynasty of the Qing in 1644 by the ethnic non-Chinese Manchu. The majority of the scholar officials continue to serve the new rulers. Many scholars however refused to collaborate with the new dynasty. This fostered the revival of the traditional ideals of the literati class of a life not spent in an office. The motif of landscapes as a scholarly and sophisticated ceramic design of the seventeenth century often represented a counterbalance to the ideals of Confucianism that were to serve, be loyal to the ruler and fulfill to official duties.

A typical projection of the literati ideals into the landscape are the tiny figures found on many landscape paintings which were often also integrated into seventeenth century landscape on porcelain: a traveller crossing a bridge, or the figure of fisherman, depicted sitting at the shores of a river landscape or in a boat on the water. They are symbolic figures, an intellectual fantasy of an ideal life of retirement close to nature.