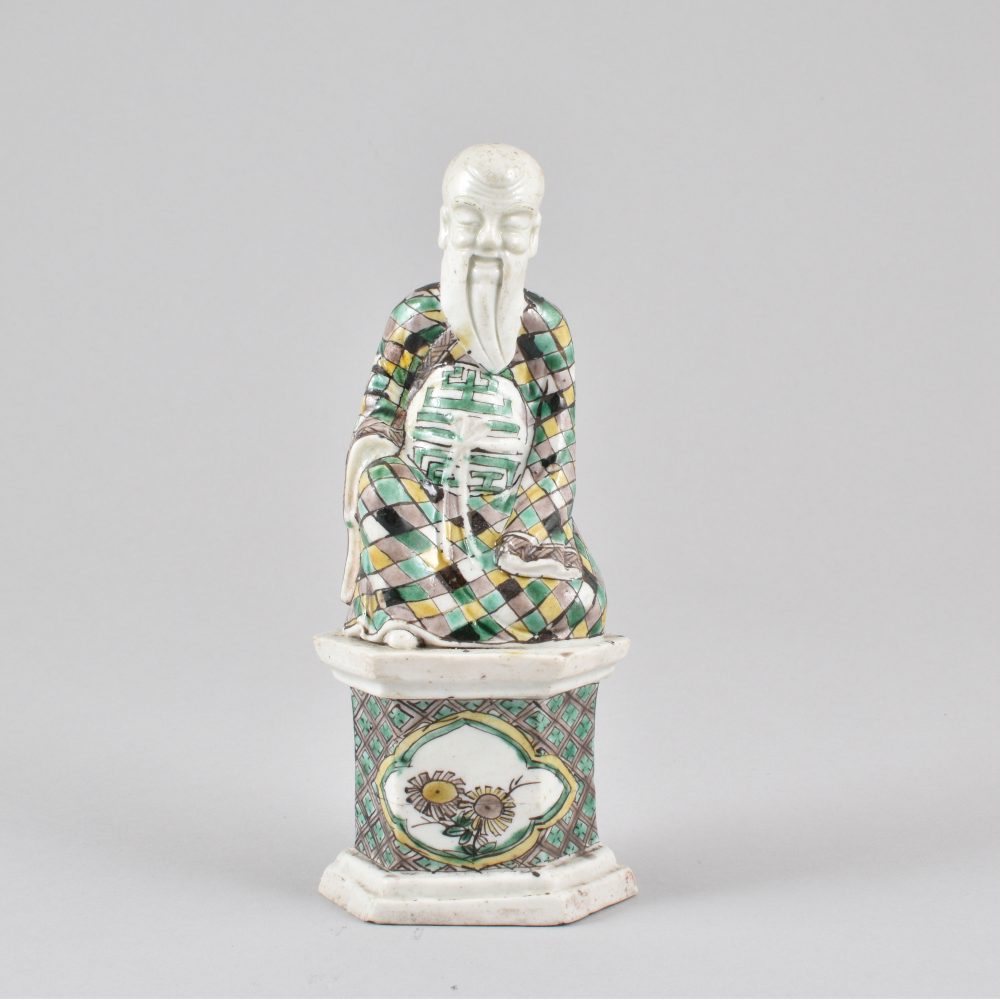 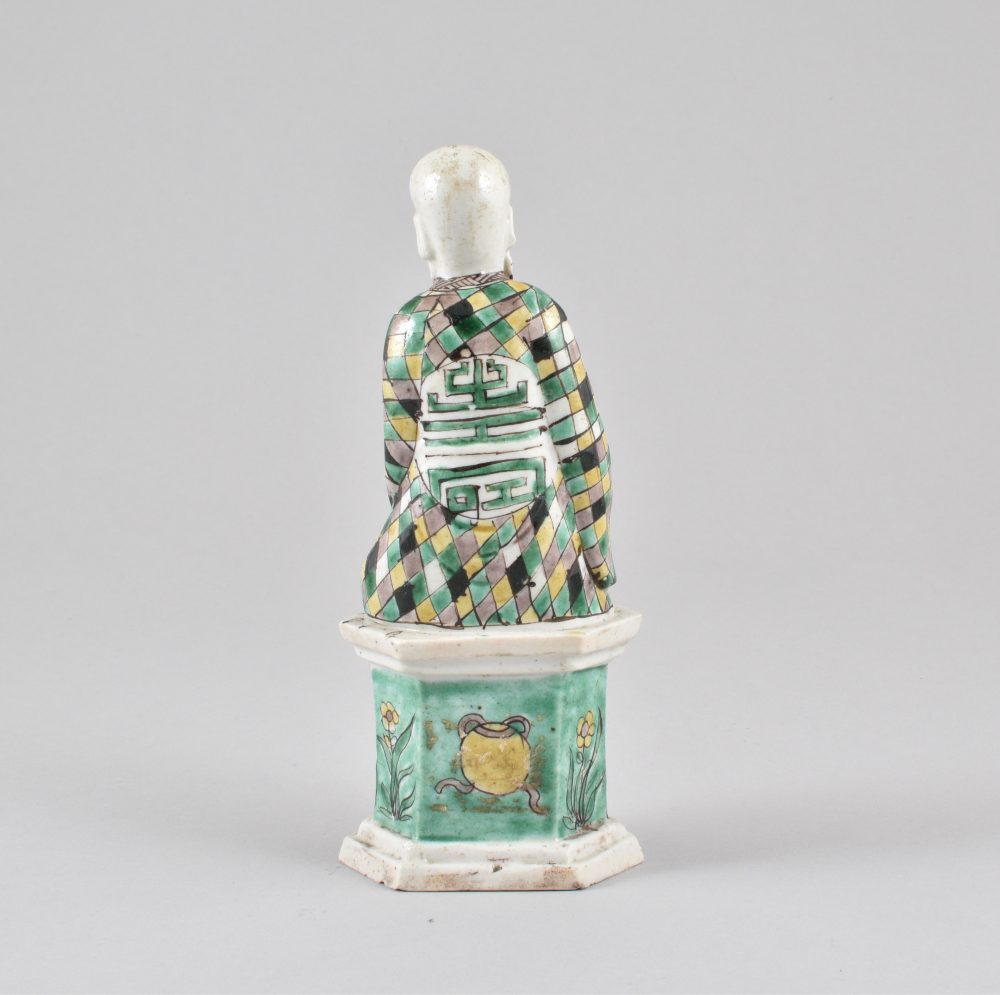 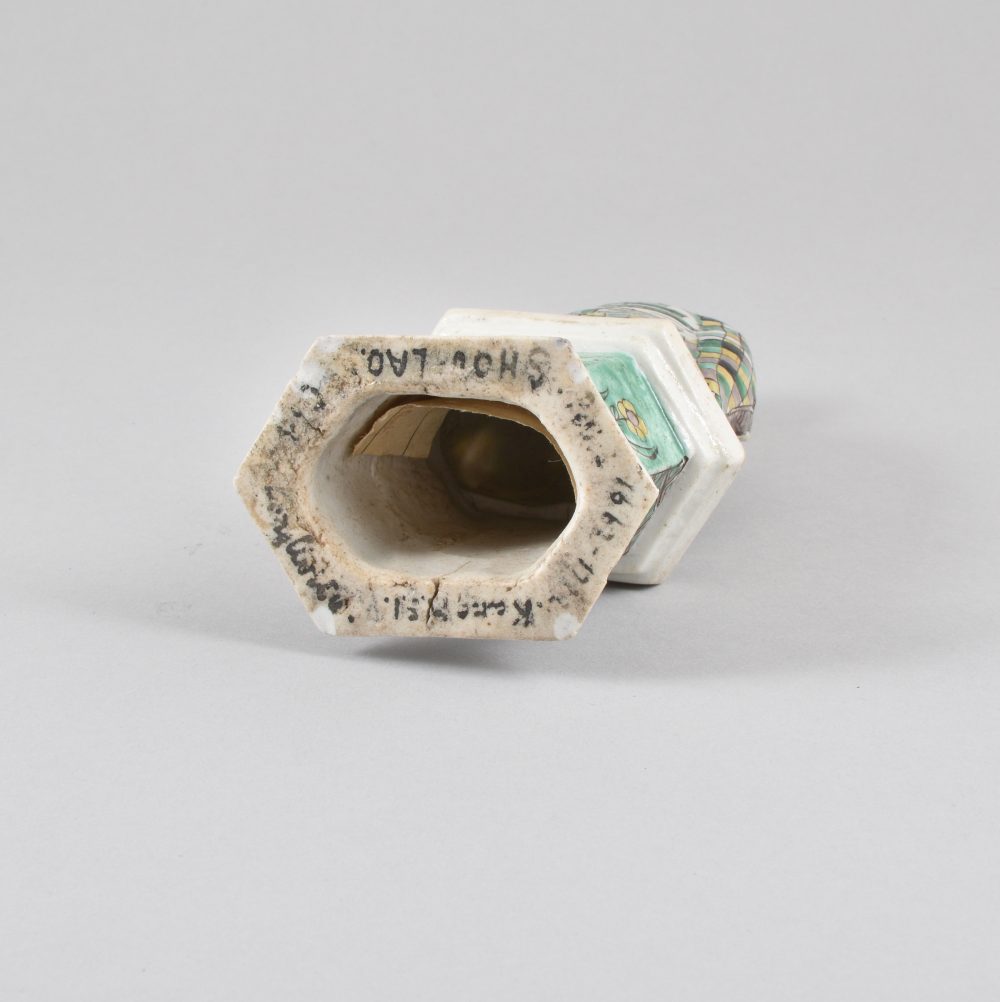 A Chinese figure of an immortal decorated with famille verte enamels on the biscuit. Kangxi period

Figure of an immortal seated on a hexagonal base, decorated in famille verte enamels on the biscuit, the face, beard and left hand covered with transparent lead glaze. Three sides of the base have geometrical patterns and rosettes in enamels ; the three sides at the back with sprays of flower and a brocade ball.

A similar figure is held on at the Rijkmuseum in Amsterdam (inv. No. AK-RBK 15872) and is illustrated by Christiaan J.A. Jörg in Famille Verte Chinese Porcelain in Green Enamels (p. 122, cat. 110). This figure is also illustrated by Jörg & Van Campen in Chinese Ceramics in the Collection of the Rijkmuseum, Amsterdam. The Ming and Qing Dynasties (cat. 215).

Two similar figures, from the Sowell Collection, are illustrated by Michael Cohen and William Motley in Mandarin and Menagerie, Chinese and Japanese Export Ceramic Figures (p. 55, 1.4). The authors suggest that this figure is a scholar.

The eight immortals appeared as a discrete group in the Jin dynasty (1115-1234) and became increasingly popular from the Ming dynasty to the Qing. Sets of the « Eight Daoist Immortals » were popular for the Chinese market as well as for export to the west, where such small figures adorned the interior as exotic representatives of faraway « Cathay ». His official cap identifies probably this figure as the Immortal Cao Guo-jiu, a Song-dynasty military commander who usually holds a court tablet or castanets and is the patron of actors and performers. The scroll could also suggest that this figure could be a scholar, part of a much larger group, all with a different attributes, perhaps symbols of scholarship or the calendar months.