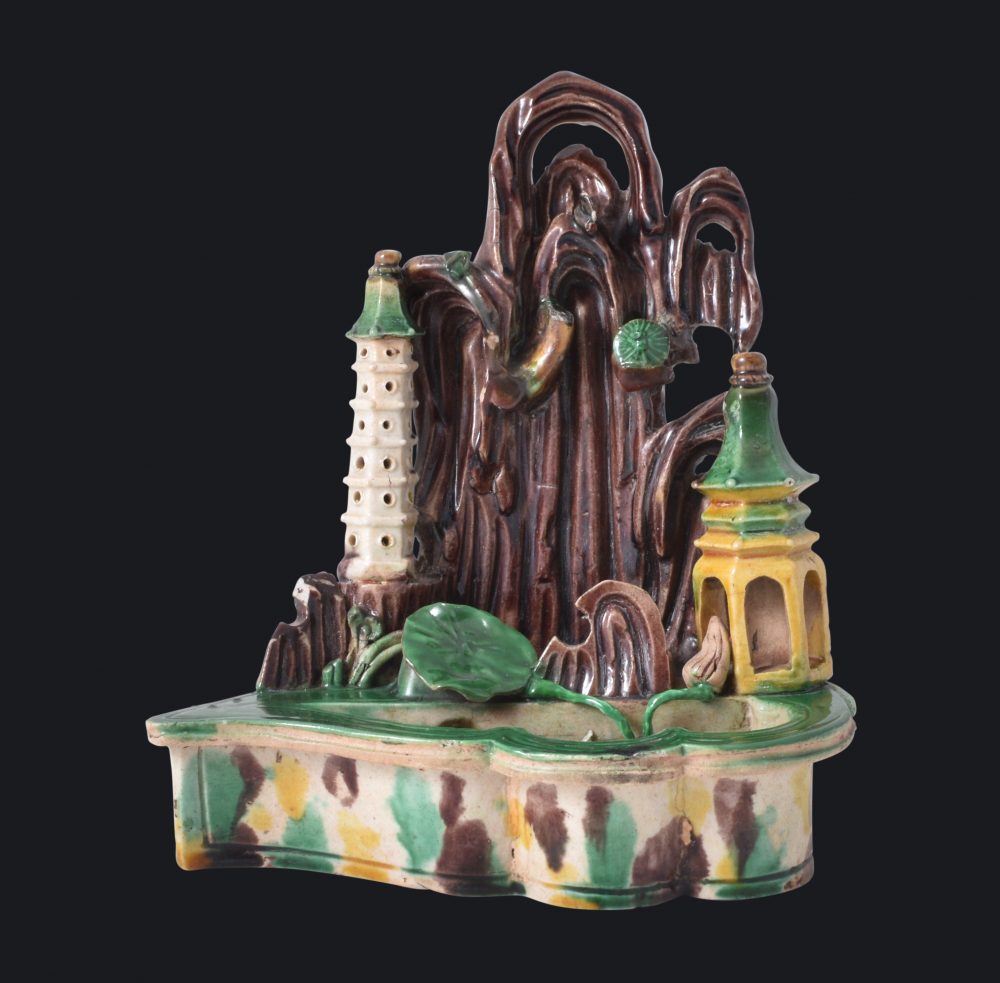 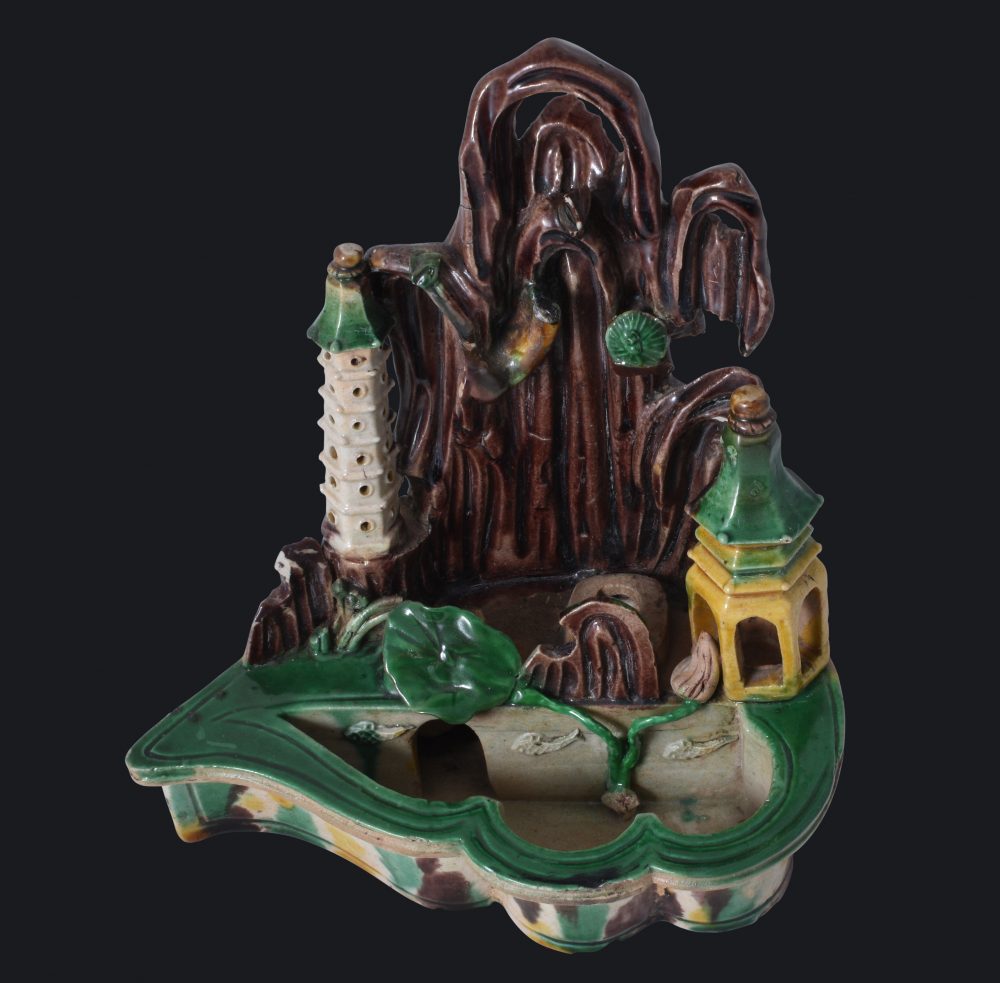 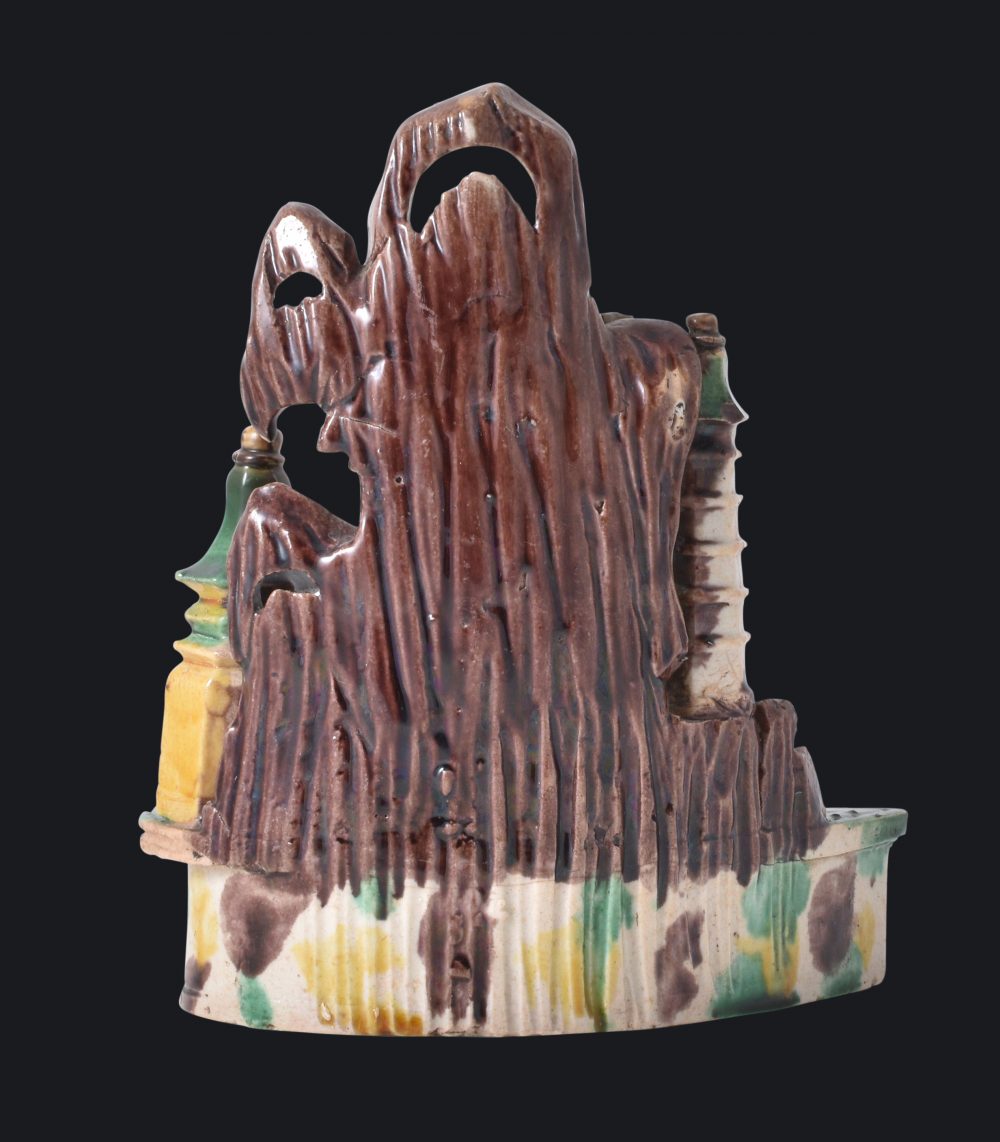 Modelled as two pagoda’s situated against a rocky backdrop, in the foreground, a pond, which has the shape of an artemisia leaf, with fish and crabs, the sides issuing lotus stems.

A comparable example, from the former Grandidier Collection is now in the Musée Guimet, Paris (Acc. Nr. G2806) and the Taft Museum (Cincinnati) has a pair or large pagoda brush washers.

This is an exquisite piece of modeling, creating a small world with naturalism and charm. The pond is clearly intended to be filled with water, as the function of this item is a brushwasher. Such models offer a miniature version of the earth and present a microcosm of the world.

The intention is to combine natural features such as rocks with man-made architecture, terraces, and pagodas. This creates the harmony between man and nature that was import to the Confucian tradition and was significantly developed from the Song dynasty.

This sculpture is a particularly fine example of susancai, known in the West as famille verte biscuit ware. The terme “biscuit” first appears in 1862 in André Jacquemart and Edmond Le Blant’s Histoire Artistique, Industrielle et Commerciale de la Porcelaine. The term “biscuit” was used to differentiate the wares enameled over a clear hight-fired glaze covering the body, which defines most famille verte-decorated porcelains. Literally translated, the Chinese words for landscape (shan-shui) mean “mountains and water”. Mostly Chinese landscapes show precisely that, flat plains are hardly ever being depicted.

As a whole, there are many hidden messages conveyed by this brush washer. One theme is that of longevity, as the artemisia leaf was believed to have the ability to prolong life. The lingzhi fungus – food of the immortals -, in front of the left pagoda, is often used Chinese symbols for longevity. There are also several symbols referring to Buddhist belief such as the two fish, conch shell and lotus in the pond. They are three of the Eight Auspicious Buddhist Symbols, bringing peace and blessings.