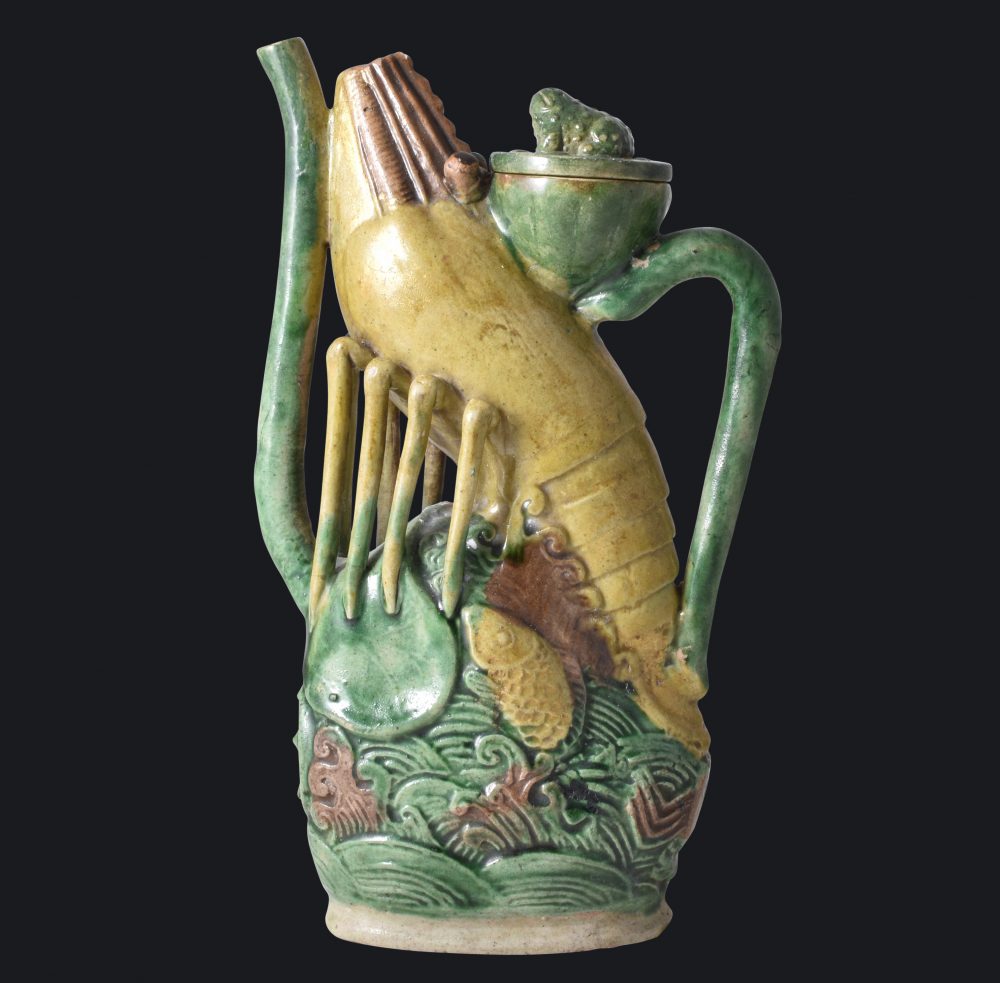 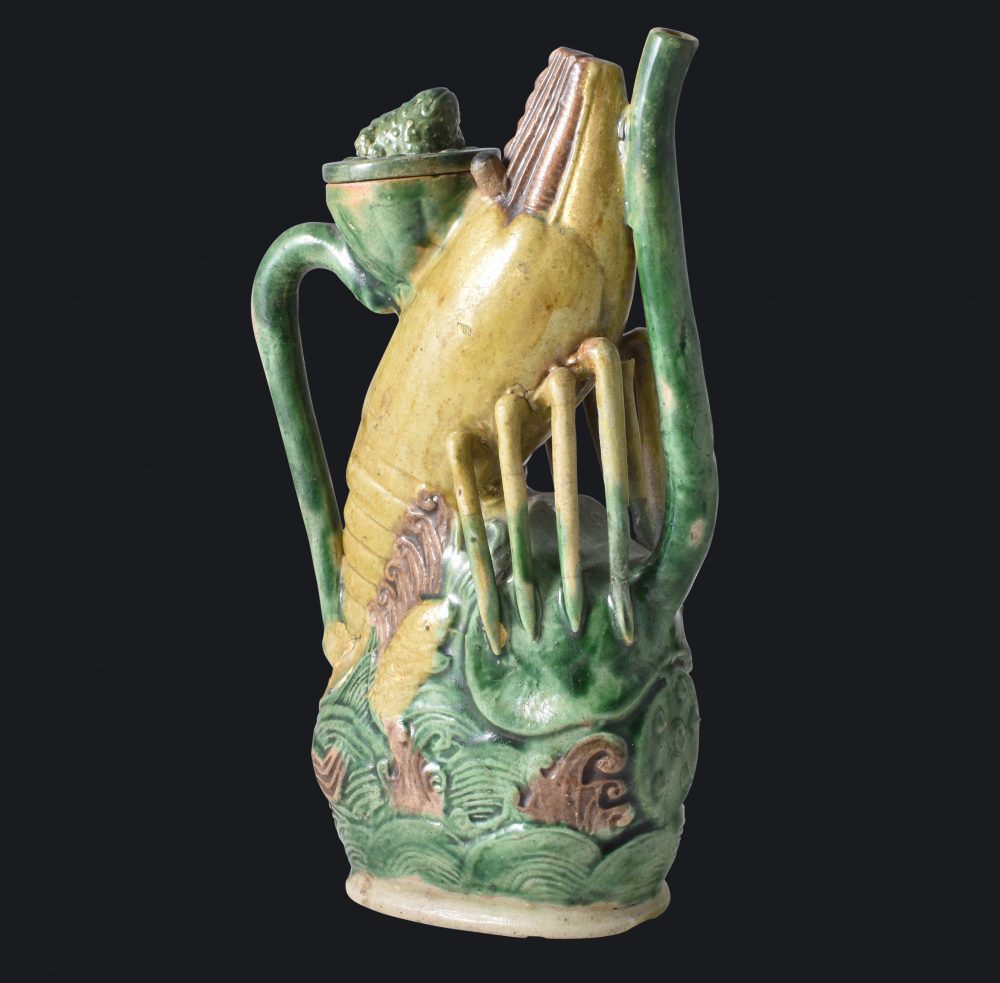 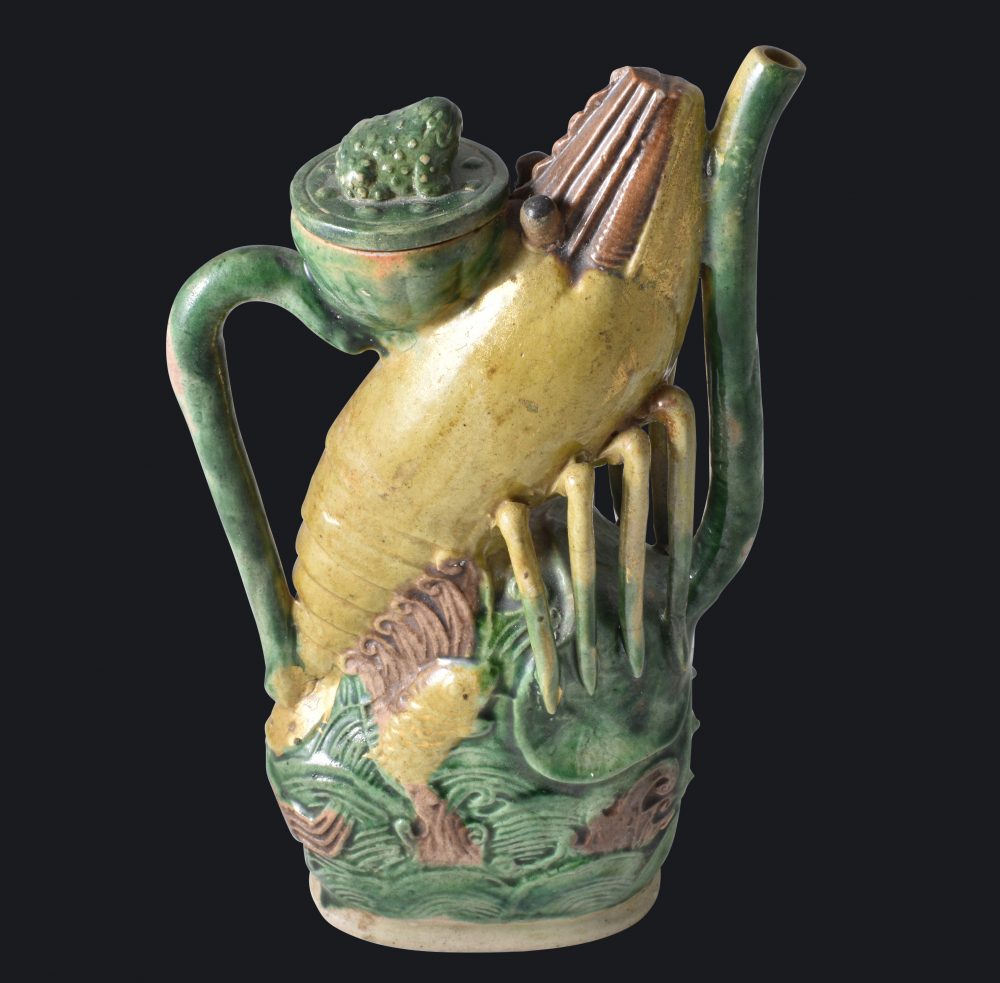 A Chinese crayfish jug decorated with sancai enamels on the biscuit. Ming dynasty

The ewer is modelled as a crayfish rising from crashing waves with carp and lotus amongst the waves. One lotus stem curves upwards to form the slightly serpentine spout. Another lotus stem forms the loop handle terminating in a half-lotus pot as the filler with a small flat cover with frog finial. The exterior is covered in ochre, green and aubergine glazes

From an important European collection

Other examples can be found in several western museum collections, including the British Museum, the Bauer Collection, as well as the Staatliche Kunstsammlungen Dresden.

For a similar example but with a carp (Kangxi), see Christie’s NYC, The Collector: English and European Furniture, Works of Art & Ceramics & Silver, 18 October 2017, lot 829 (property from the Anna-Maria and Stephen Kellen Foundation, NYC).

Sancai-glazed biscuit ewers of this form were acquired as curiosities and are recorded in early European collections from this time. In April 1590, Ferdinand de Medici, Grand Duke of Tuscany (1549-1609) presented Christian I, Elector of Saxony (1560-1591) with a group of 16 porcelain pieces, 8 of which are still preserved. They were entered in the inventory of the Kunstkammer of the Grünes Gewölbe, Dresden, in 1594 (U. Pietsch, A. Loesch and E. Ströber, China Japan Meissen, The Dresden Porcelain Collection, Dresden, 2007, p.13.). Among them was one of these ewers in the form of a phoenix and another related container in the form of a crayfish. Together with an oil lamp modeled with a figure of Gui Xing on top, these three objects are likely to be the first pieces with enameled biscuit decoration to be recorded in a European collection.

Such ewers were also made in the late Ming Dynasty both for use in the domestic Chinese market and also for Export to Southeast Asia, in particular Indonesia where they were used for wine in ritual ceremonies and where several examples still remain.